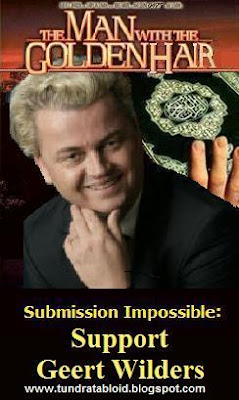 This is a welcome development, and what would have been even better would be a full dismissal. Round one has gone Geert’s way due to the judge on the bench tampering with one of his witnesses. The whole trial has been one gigantic farce. KGS
Read Klein Verzet for the whole scoop.

UPDATE: Gates of Vienna: Turning the Tables
An update from VH:

Now Geert Wilders has filed a complaint against Tom Schalken, of the judiciary of the Amsterdam Court, who ordered the prosecution of Geert Wilders

AMSTERDAM — A Dutch court ordered a retrial Friday for anti-Islam lawmaker Geert Wilders, sending the closely-watched hate speech case back to square one before a whole new panel of judges.
The far-right politician faces charges of inciting hatred against Muslims for many remarks, including some equating Islam with fascism and violence and others calling for a ban on the Quran and a tax on Muslim headscarves.
Wilders accused judges at the Amsterdam District Court of bias and called for their dismissal after they refused to recall a defense witness who wrote on a weblog that a member of an appeals panel directly involved in the case had improperly contacted him.
A hastily convened substitute panel ruled Friday that Wilders’ objections were valid, which means the trial that began in January must restart from the beginning with new judges.
Wilders welcomed the decision.
“This gives me a new chance on a new fair trial,” he said in an e-mail to The Associated Press. “I am confident that I can only be acquitted because I have broken no law but spoke the truth and nothing but the truth and exercised my freedom of speech in an important public debate about the dangerous totalitarian ideology called Islam.”