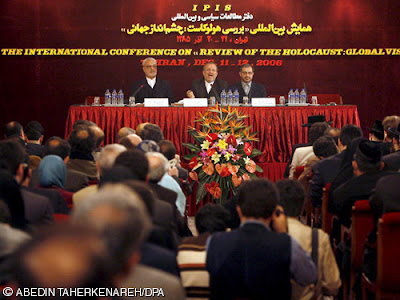 Honestly, what were they thinking? Oh the very same thing French FM Kouchner was thinking when he met with a legislative member of Hezbollah! These morons think that they must engage in “dialogue”, even with the most intransigent, intolerant groups in existence. It’s pure buffoonery. KGS

By BENJAMIN WEINTHAL
10/21/2010 06:18
Israeli officials call German legislators’ decision to meet with Ali Larijani, the speaker of Iran’s parliament, “especially regretful.”
BERLIN – Israeli officials have sharply criticized five Bundestag deputies for meeting in Teheran this week with Ali Larijani, the speaker of Iran’s parliament, who has defended his government’s denial of the Holocaust.
“It is especially regretful that German legislators met with Holocaust deniers,” an Israeli official told The Jerusalem Post.
Larijani defended Iran’s denial of the Holocaust at the Munich security conference in 2009, saying his country has “different perspectives on the Holocaust” and no laws barring such denial.
The German legislators reportedly met on Monday with Foreign Minister Manouchehr Mottaki, who delivered a speech at the 2006 international Holocaust denial conference held in Teheran.
The Israelis officials said the German “visit is counterproductive and regretful, and clearly sends the wrong message to the Iranian regime. It is quite surprising that German legislators choose to hold an official visit to Iran, at the same time when the German government, together with other leaders of the democratic world, work hard to tighten the sanctions on Iran in order to prevent it from threatening the world with nuclear capabilities.”
According to Left Party deputy Lukrezia Jochimsen, a member of the German delegation, the trip also entails meetings with Gholam-Ali Haddad-Adel, the head of Iran’s parliamentary cultural committee and Iran’s state-controlled Press TV.
Haddad-Adel spoke in support of Iran’s fatwa calling for the murder of British novelist Salman Rushdie because he “defamed Islam.” According to a BBC documentary broadcast in July, Useful Idiots, Press TV played a significant role in violating human rights during the protests against the reportedly rigged Iranian presidential election in 2009.
The Bundestag issued a statement noting that the legislators’ meeting with their Iranian counterparts is part of a cultural dialogue and exchange program between the two legislatures.
When asked about Israel’s criticism of the trip, a spokeswoman for the German Foreign Ministry told the Post by e-mail on Tuesday that “the Bundestag decides in its own jurisdiction and responsibility over trips and its committees. The Foreign Ministry supports the members of the Bundestag with respect to the realization of the trips. As a basic principle, the German government does not evaluate these trips.”
Asked if the trip contradicts the international efforts to isolate Iran because of its nuclear program, the Foreign Ministry spokeswoman wrote, “The position of the German government on the Iranian nuclear dossier remains unchanged.”
Peter Gauweiler, chairman of the Bundestag’s cultural and education committee, arrived in Iran last week with committee members from a cross section of German parties. Jochimsen from the Left Party, Claudia Roth from the Green Party, the Social Democrat’s Günter Gloser, and Monika Grütters, who, like Gauweiler, is a member of the conservative Christian party (CDU/CSU), are on a six-day visit.
When asked about Gauweiler’s decision to hold meetings with Iranian officials who have denied the Holocaust, Christoph Tiné, a spokesman for Gauweiler, told the Post by e-mail that he could not reach Gauweiler in Iran for a comment. Sascha Götz, a spokesman for Gloser, told the Post that the visit revolves around whether “dialogue is a means or not” with Iran. Götz declined to answer questions about the purpose of meeting Iranians who denied the Holocaust.
Emanuele Ottolenghi, a senior fellow at the Foundation for Defense of Democracies in Washington and an expert on EUIranian relations, told the Post that “The decision by the German Federal parliament to send a delegation to Iran sends the wrong signal and runs contrary to the spirit of current European policy vis-à-vis Iran.