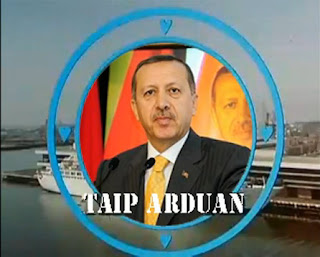 Turkish Recep Tayyip Erdogan
Up to his ears in the Mavi Marmarma flotilla fiasco
The Turkish government has its fingerprints all over the “aid flotilla” to Gaza, which highlights the raising of the bar in the international incitement against the Jewish state. The Turkish PM was just in Finland spreading his tripe about how unfair it is that the Turks still are waiting for a green light on its membership into the EU, but not one journalist here dared to bring up the involvement of his government in the incitement of Israel, in which its direct involvement led to the deaths of IHH thugs and the physical beatings of Israeli IDF soldiers. KGS
Haaretz: Data found on a laptop of a passenger of last May’s Gaza bound flotilla indicates that the flotilla’s organizers received assistance from the highest levels of the Turkish government, including Prime Minister Recep Tayyip Edogan and other senior government officials.
Records of the meeting between the heads of the six groups behind the flotilla, in Istanbul, two weeks prior to embarkation and other similar documents were found on laptop computers confiscated by the Israel Defense Forces following the takeover of the flotilla.
The documents suggest long-term and detailed preparations by the organizers, months in advance, including readying for various scenarios, including the landing of commandos on the ships using ropes from helicopters.
The Turkish government denies offering any assistance to the flotilla’s organizers.
Immediately after the takeover of the ships on May 31, the IDF confiscated all computers and documents on the vessels. The material was taken to the intelligence analysts, and some of it went to the
Intelligence and Terrorism Information Center, an organization that is authorized to analyze intelligence, headed by Dr. Reuven Erlich. The ITIC released the information in a report earlier this month.
More here.