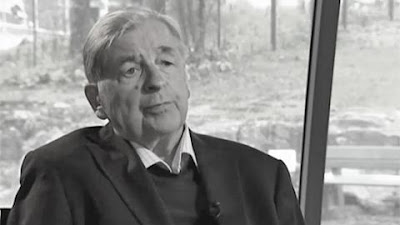 Georg Carl Casimir Ehrnrooth
( July 27, 1926 – October 19, 2010 )
Yesterday many Finns (as well as yours truly) mourned the passing of a great man, political leader, staunch anti-communist, defender of the Finnish constitution and good friend of Israel. He will be sorely missed.
Georg Carl Casimir Ehrnrooth was at one time a deputy judge, lawyer and a MP, first elected to Parliament in 1958 as Swedish People’s Party candidate (RKP), he became one of Urho Kekkonen’s best-known opposition politicians , who continuously criticized his foreign policy decisions with the Soviet Union.
According to a Wikipedia entry, Ehrnrooth’s interest in politics began at the war crimes ‘tribunals’ , while he studied law at the University of Helsinki . Ehrnrooth experience the way in which the accused were treated, and especially Attorney Urho Kekkonen’s activity in these tribunals had a decisive influence of his political awakening.

According to a Helsingin Sanomat obituary, “In 1973 Ehrnrooth left the Swedish People’s Party in response to the party’s support for special legislation under which President Kekkonen was given an extra term without an election.  He set up his own Constitutional People’s Party. The party was later renamed the Constitutional Party of the Right. Ehrnrooth served as the party’s chairman throughout its 18 years of existence.”

Wiki continues: Anti-communism can be regarded as an important element of Ehrnrooth’s political attitudes. From the same arose from his anti-Kekkonen attitude as well. Over the years, awakened doubts about Kekkonen’s patriotism and communist sympathising were a crucial background for his anti-Kekkonen attitudes. The 1956 presidential elections and the communists in public support for Kekkonen, testified to Ehrnrooth what values Kekkonen   represented.
A man who stood up to both the communists and the herd think mindset in  Finland during the height of Finlandization, tells the Tundra Tabloids that a great man indeed has just left us. Rest in peace dear sir, rest in peace. KGS
NOTE: Special thanks to Vasarahammer for the kindly reminder.