The Local, the largest Swedish English language online news organization, chooses an interesting way to headline it’s article on Wilders, it words it in the following way: “Wilders deems Swedish citizenship ‘undesirable”. Now ladies and gentlemen, what “The Local” is doing here, is carrying out a continuation of the same demonization campaign it’s waging against the Sweden Democrats,  knowing full well it’s headline is flat out, disingenuous, in other words, leading the reader to believe something altogether different than what the article is reporting.
Most people flip through newspaper and surf the web by glancing at the headlines, and then focus in on an article that catches their fancy, and the editors know this. Many others may in fact read the article by only half way, and the editors know this, so of course its crucial to print all the relevant information early on. It’s only into the 7th sentence do we read the real issue that Wilders deems to be the key problem: ” that government ministers should not have dual citizenship as it implies dual allegiance.“
See how it’s done folks? News journalism needs to be held to a higher standard then they are presently, and those that do lift the bar for themselves, are worth their weight in gold. KGS 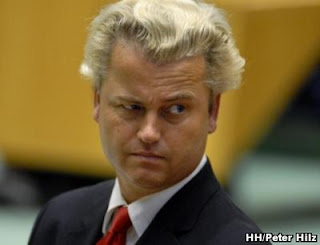 Wilders: You can’t be a Dutch government minister
and be loyal to two different states, get it?
The Dutch far-right  conservative leader Geert Wilders, whose Party for Freedom (PVV) supports the new conservative minority government, has demanded that a new minister revoke her Swedish citizenship, reported the Dutch De Telegraaf daily.
Wilders’ demands refer to the new state secretary of health Marties Veldhuijzen van Zanten-Hyllner who was born in Gothenburg and holds dual Dutch-Swedish citizenship.
“I knew nothing about this, was not informed. The Party for Freedom still holds the view that dual nationality is very undesirable,” Wilders said.
Wilders plans to raise the issue when the government’s programme is discussed in parliament on October 26th-27th.
A spokesperson for the deputy prime minister has confirmed that the government had been informed of Zanten-Hyllner’s status as a dual Dutch-Swedish citizen, and saw no problem with that.
This is not the first time Geert Wilders and the PVV have reacted to multinational ministers. When the previous government was in office, the party tabled a vote of no confidence in respect of two ministers – Ahmed Aboutaleb and Nebahat Albayrak – of Dutch-Moroccan and Dutch-Turkish descent.
Wilders has previously said that the PVV’s position is that government ministers should not have dual citizenship as it implies dual allegiance.
More here.