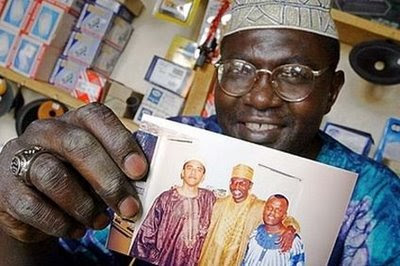 Obama’s half brother Malik:
On my way to getting my fourth
This is one of Obama’s hidden-in-the-closet skeletons that underline the point of just how much Obama himself is´not a cultural American. Really. The man grew up during his formative years outside the US in Indonesia, his relatives from Kenya reflected Muslim Kenyan views, and then there’s his marxism, hammered into his head from an early age by his mentors. It’s not only astounding that he was elected into the White House, but with his record and background, that he even got into the US senate. KGS

AIROBI, Kenya — President Barack Obama’s polygamist half brother in Kenya has married a 19-year-old woman more than 30 years his junior.
Malik Obama, 52, told a Kenya news station that the teen quit school and wanted to get married. He appeared on video taken by a hidden camera, although he knew he was talking to journalists.
“She decided she doesn’t want to go back to school. She wants to get married now. She came here, and what am I supposed to do? So we are married,” Malik Obama said on the video broadcast by NTV.
Sheila Anyango is Malik Obama’s third wife, although he did not say when the wedding took place. Polygamy is legal in Kenya if it falls under religious or cultural traditions.

MORE: Girl quits school to be third wife of Obama kin
Mary Aoko Ouma is planning to go to Ng’iya shopping centre where she roasts and sells maize, but visitors keep flocking to her home.She attracts attention in the village because her daughter, 19-year-old Sheila Adhiambo, abandoned her studies to get married as the third wife of US President Barack Obama’s step-brother, Malik Abong’o Obama.
Sheila lived with her widowed mother and was a Form Two student at Agoro Oyombe Secondary School in Siaya County, but she gave up school to become Mrs Obama. “My daughter went missing on October 1, and I did not know where she was. Neighbours soon came to my home and asked me if it was true I had married off my daughter to one of the Obamas,” Ms Ouma says.
“When I heard about the marriage, I recalled Malik’s frequent visits to my home. Five days later, she came and told me to accompany her to school because she wanted to clear with the school and leave officially. “I explained to her why it was important to finish her studies before getting married, but Sheila told me the man in her life was showering her with a lot of love.”

NOTE: After Zero loses in 2012, Michelle Obama and children would be well advised to steer clear of living outside the US in a Muslim country with the one termer.