Ahmadinejad said of Lebanon, “I feel like I am at home, like I am in my country.” 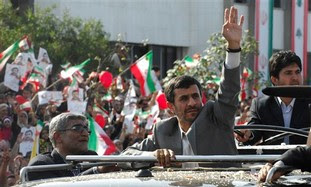 Though the Heznazis are to some degree, independent, they are very much tied to the Iranian regime’s teat, as all statists in the West and elsewhere, are happy to be. All that largesse comes however, with a political price tag. But don’t be fooled, while there may be a big turnout for Dinner Jacket, (what authoritarian state can’t muster the people for a big show?) he has lots and lots of enemies in Lebanon, who most certainly see this visit as an imperialist, self serving venture that it is, and are busy preparing themselves for the eventual attempt by Hezbollah to exert it full control over all Lebanon.  KGS
JPOST: “We discussed int’l terrorism and how to differentiate it from the resistance,” Suleiman says after meeting Iranian president; Ahmadinejad gives Lebanon gift that “only 6 other countries have.” Iranian President Mahmoud Ahmadinejad met with Lebanese President Michel Suleiman on Wednesday, who said that Lebanon and Iran are fighting the Zionists together. “We support Lebanon fully, and we call for the liberation of occupied lands in Lebanon and in Syria,” Ahmadenijad said at a press conference with Suleiman.

UPDATE: The TT literally just clicked ‘publish’ when Vlad Tepes sent the TT the following report from Stratfor:
“October 13, 2010The car of pro-Hezbollah imam Sheikh Mustafa Malas exploded this morning at dawn in front of his house in northern Lebanon, AsiaNews.it reported Oct. 13. No one was injured, but the car was completely burned and the windows in his house were shattered. A Sunni and imam at the Al Minieh mosque, Malas supports Hezbollah, Iran and Iranian President Mahmoud Ahmadinejad’s policies.