It’s only when the supposed spy ring is Jewish, and caught with Irish passports, then all hell breaks loose. 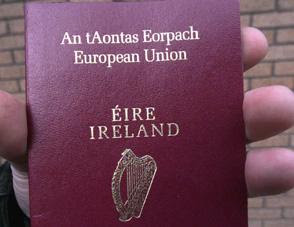 Mums the word when it’s caught
in the hands of a non-Jewish spy ring
The hypocrisy of the world is so predictable that at times, it’s almost humorous. Earlier this year there was a gigantic international flap over the suspected use of Irish passports by an Israeli undercover team that supposedly offed a terrorist in Dubai. The European media, politicians, hand wringers and bed wetters were all calling for the Israelis’ hides. Lets see if this latest caper elicits the same amount of fury from the Euros. The Tundra Tabloids seriously doubts it. KGS
H/T: TINSC “You’ll notice that they couldn’t help but mention the Israeli passport issue.  But in doing so, they pointed out their own cowardice and hypocracy.”

By Tom Brady and Anita Guidera
Tuesday October 12 2010
A GARDA investigation has established that the details of six Irish passports were replicated for use by alleged members of a Russian spy ring.
The investigation, which is being carried out by detectives from the Special Branch, is trying to pinpoint where the details were copied and then inserted into the forged documentation.
The inquiries also involve officials from the Department of Foreign Affairs and the Passport Office and follow a tip-off to the authorities from the FBI.
The fraudulent use of the passports was discovered when the FBI smashed the spy ring, which was based in the US.
But it is not yet confirmed whether all of the forged documentation had been used by the spies.
One of the passports belonged to a volunteer with Irish charity To Russia With Love named as Kathryn Sherry and two others to a married couple in Co Donegal. All had all been granted visas at the Russian Embassy in Dublin.
After gardai have completed a file, it will be studied by senior officials from the Department of Foreign Affairs and, if the Russians are clearly implicated in the forgeries, a decision will be taken on whether diplomatic action should be taken.
Earlier this year, the Irish Government and public were outraged at the use of forged Irish passports by Israeli agents, who were alleged to have murdered Hamas activist Mahmoud al-Mabhouh in a Dubai hotel.