It’s about time these creeps are slapped with fines and jail terms when they break the law. Hopefully it’s a precedent that keeps these goons in check. KGS 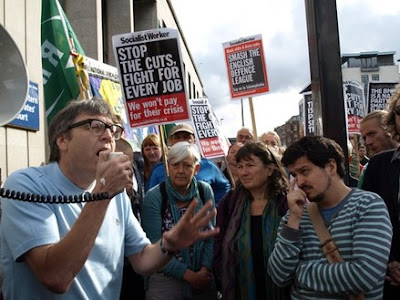 MARTIN SMITH BLOVIATING WHEN HE’S NOT
BUSY KICKING THE BALLS OF THE POLICE
Anger as court finds Martin Smith guilty
Supporters were shocked as a magistrates’ court this week found leading anti-fascist Martin Smith guilty of assaulting a police officer.
Weyman Bennett, joint national secretary of Unite Against Fascism (UAF), said after the verdict, “I’m astounded and angered. Anti-racists from Cable Street to Lewisham to our own day have faced repression from the state.
[…]
The court sentenced Martin to a community order, of 80 hours unpaid work over a year and to pay £100 to the police officer.
Martin, who is a national officer of UAF, was arrested on the protest in October against fascist BNP leader Nick Griffin’s appearance on Question Time.
More than 200 people crowded onto the pavement outside the court on Tuesday morning to support Martin.
Inside PC Liung told the court that Martin Smith kicked him in the genitals at the October protest.
Liung said, “I was in fear for my safety.” He claimed he was pressed against the gates of the BBC with hundreds of people in front of him and that missiles were thrown repeatedly.
The court was shown intelligence footage of the day. In around 10 minutes of footage, no missiles are thrown.
Liung added that he bent down to try and push the crowd away with his shoulder and saw a cherry Doc Marten shoe kicking him.
He then looked up and saw a man he says was Martin Smith.