It’s not so much news that this collection of Lefty actors, political hacks and members of pseudo human rights organizations are against Israel, they have long been vocal in their anti-Israel hatred in the media and in their blogs and websites. This provocation however, has to be taken into context with the Finns new found infatuation with the “peace making business“. Various voices within and outside of the Finnish government have been sounding their desire to make Finland a recognized player internationally in brokering peace between feuding parties who seek an alternative to hostilities.
[NOTE: Finnish FM A.Stubb is a great believer in Turkey as a fair broker in the peace trade ]

“The list includes several high profile Finnish politicians, academics, actors and intellectuals. Among them is Erkki Tuomioja who once – while foreign minister of Finland –compared the Israeli army to the Nazi army and Hannu Reime whose article on the Finnish Jewry during WWII was published in the weekend section of Haaretz. Other famous petitioners were Aki Kaurismäki, whose film The Man Without a Past was nominated for an Oscar and Jörn Donner, who has established himself in politics and cinema.” 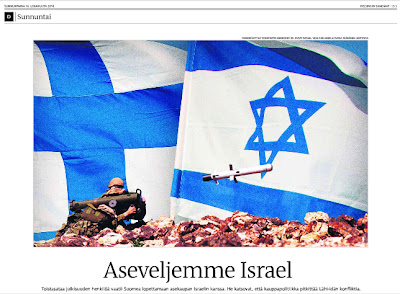