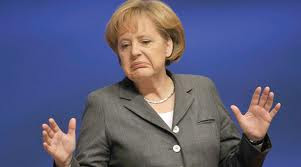 Angela Merkel: Ok, ok, sharia law is practiced
in Germany, but we still have our pretzels and beir

Future generations of Europeans are going to be using these traitors names as cuss words. The professor mentioned in the story is a dolt as well, traitors all of them. KGS

Sharia law being used in Germany in Muslims’ domestic disputes

A leading law professor has contradicted Chancellor Angela Merkel’s statement that Sharia law was not practiced in Germany, saying a variety of Sharia-based rulings were being made all the time.

“We have been practising Islamic law for years, and that is a good thing,” Hilmar Krüger, professor for foreign private law at Cologne University, told Der Spiegel magazine.

Family and inheritance rulings were often made according to Sharia law, he said, listing a range of examples.

Women who are in polygamous marriages legal in their countries of origin can make claims of their husbands in Germany regardless of the fact that their marriages would not be lawful here. They can claim maintenance from their husbands and a share of an eventual inheritance, said Krüger.

German judges often refer to Sharia, as the Federal Social Court in Kassel did a few years ago when it supported the claim of a second wife for a share of her dead husband’s pension payments, which his first wife wanted to keep all to herself. The judge ruled they should share the pension.

In another case, the Administrative Appeals Court in Koblenz granted the second wife of an Iraqi living in Germany, the right to stay in the country. She had already been married to him and living in Germany for five years, after which the court said it would not be fair to send her to Iraq alone.

A judge in Cologne ruled that an Iranian man should repay his wife’s dowry of 600 gold coins to her after their divorce – referring to the Sharia which is followed in Iran.

Erlangen lawyer and Islam scholar Mathias Rohe told the magazine that the use of laws from various countries was an expression of globalisation. “We use Islamic law just as we use French law,” he said.

While Canada, for example, does not recognise any foreign laws, the German legal structure allows some to be upheld – as long as they do not contradict the constitution.