Skip to content
Home
/
2010
/
October
/
8
/
Eurabia
/
OBSERVATION: ISLAM IS LIKE A BONE CAUGHT IN EUROPE’S THROAT…….
Facebook
Twitter
Google+
LinkedIn
Pinterest
This is the very same theme the Tundra Tabloids has mentioned and returned to time and again, Europe’s decimation, genocide of European Jewry, and the replenishing of that depleted number with anti-Semitic Muslims who for the most part, prove incapable of accepting European values and culture.
On both fronts, Europe is guilty of inflicting this damage upon itself, murdering its Jews and wiping out their historical cultural presence on the continent, and now they stand posed to do the very same thing to themselves. While it may not mean a quick emigration of Europeans to elsewhere, it’s bound to happen over time.
European culture and its history will end up like the pharaohs of Egypt, -that is if the Islam practiced hasn’t devolved into its purist form by then, like the Taliban etc.-  with the cries of the muezzin ringing our from every street corner calling the faithful to prayer, while dhimmi churches remain silent, their bells removed and the synagogues long since vacated. That is Europe’s future, if the status quo remains unchanged. Just think, without the rise of socialism, none of this would have happened. KGS 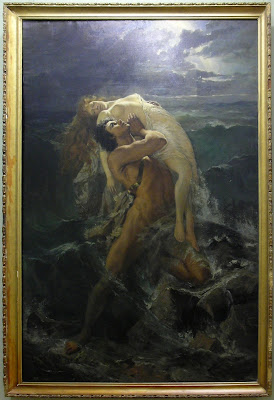 Op-ed: Open letter to Europeans, who killed Jews and are now contending with radical Islam

[…] Slowly, our dear continent, you are starting to understand what you’re dealing with here. You are starting to understand the kind of religion and culture brought along by radical Islam. Suddenly, you discover hatred and the culture of martyrs, as well as intolerance and isolation, alienation in the face of real democracy, and the shunning of human and women’s rights.

Suddenly, radical Islam is stuck like a bone in Europe’s throat. You cannot eject it – because that would immediately raise cries of racism, human rights, and the usual babble – but you cannot swallow it either, because the white, democratic, liberal and Christian European culture cannot contain such radical cultural and religious elements. It will end with a major explosion, in more than one way.

Dear continent, there is no vacuum in the world. You expelled and exterminated us, and got the Muslim world instead. At first it was nice, getting a little Mideastern atmosphere and breeze, yet with the passage of time the radical Islamic storm arrived and now threatens to sweep you away, our dear neighbor.

Now you are starting to sleep in the bed you made. Suddenly you are discovering women wearing veils, zealous eyes, and mosques at every corner. Suddenly you need to contend with high birthrates, a culture with radical characteristics which you cultivated, and terrorism and violence which you ignored. You cannot deny this for much longer. The confrontation is already here. Unfortunately we are already experts on the issue, even though here too there is no shortage of naïve, self-righteous individuals.

The first time the Creator decided to raze the world as result of our conduct, he agreed to grant humanity another chance. He asked Noah to go into the ark in order to create a new basis for the world and produce a more decent humanity. The ark was the world’s chance; a momentary shelter.

So dear Europe, will you be wise enough to prepare ahead of time a physical and cultural Noah’s Ark in order to survive and preserve yourself? Or will your aggressiveness, arrogance, and hypocrisy not allow you to admit to the disaster you brought upon yourself, turning into a continent living on borrowed time?

Your Jewish neighbor from the Middle East

Read the entire article from the beginning here.