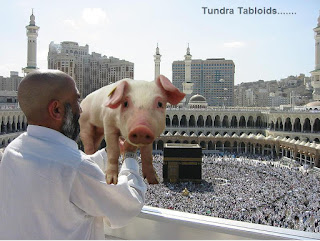 YOU MEAN LIKE THIS?
Why is it that the Mohammedan can insult the world on a daily basis, but when a non-Muslim returns the same favor, everyone cries foul? It’s not that the TT loves to offend, but using the same thinking as the Swedish artist, Lars Vilks, we have to, because it’s forbidden by Islam to do so. KGS

NOTE: The break up of the fake Belgian state couldn’t come any sooner.

A far-right Belgian leader who posted names and addresses of 770 residents on the web in a bid to prove “Islamisation” was at work in the city of Antwerp could face a 500,000-euro fine for racism.

Filip Dewinter, leader of Vlaams Belang (which means Flemish Interest), said on his website that the official registry of residents of an Antwerp suburb “includes only 21 Flemish names”.

“All the other names are African or North African. This mind-boggling list symbolises the Islamisation of entire districts of Antwerp and elsewhere,” he said.

Dewinter, who has a seat in the regional parliament of Flanders, dubbed the district in question “Mecca-on-Escaut”, the latter being the river that runs through the northern city.

His party, unlike an increasing popular sister movement in neighbouring The Netherlands, is on the decline, sliding from 24 percent of the regional vote in 2004 to 12.6 percent in June this year on an anti-immigrant and separatist platform.

A commission for the protection of privacy filed a complaint Thursday against him before the Antwerp prosecutor’s office, alleging violation of a 1992 law banning the publication of private information “based on racial or ethnic origin”.

A commission official, Emmanuel Vincart, told AFP that if the prosecutor pressed charges under article six of the country’s privacy legislation, the politician could be fined up to half a million euros.

Dewinter responded by saying he would keep the list to first names only.

“But the political analysis remains unchanged,” he said, according to the domestic Belga news agency.

“Barely three percent of the names on the list are ethnic Flemish.”