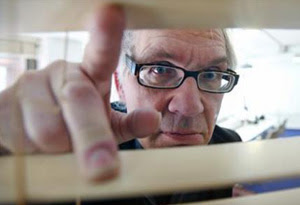 Lars Vilks: I’m baaaaaack!
He won’t be intimidated, the followers of Mo will just have to get used to Mr.Lars Vilks and his mohamed doggy and that’s that. The man is a hero, though he wouldn’t admit to that, but he is just that. KGS

THE LOCAL: “Artist Lars Vilks has been invited to finish his lecture at Uppsala University. The date has now been set for October 7th,” the university, one of Sweden’s oldest, said in a statement.
Vilks was delivering a lecture on freedom of speech and art in front of some 250 students on May 11th when he was head-butted by a man as an angry group of about 20 people offended by a film he was showing stormed up to attack him.
Police had evacuated the lecture hall but some demonstrators resisted, and officers used tear gas. Two people were arrested.
“That a university lecture is interrupted by violence is a serious thing, regardless of the opinion that provoked the reaction,” Folke Tersman, the head of the university’s philosophy department, said in Monday’s statement.
“It is incompatible with the basic values democracy is based on. It is to uphold these values that we are inviting him again,” he added.
Four days after he was attacked at Uppsala University, Vilks’ home in the south of Sweden was fire-bombed by two Swedish brothers of Kosovar origin.
They have been convicted and were given jail sentences of two and three years.
Vilks has faced numerous death threats and a suspected assassination plot since his drawing of the Muslim prophet with the body of a dog was first published by Swedish regional daily Nerikes Allehanda in 2007.