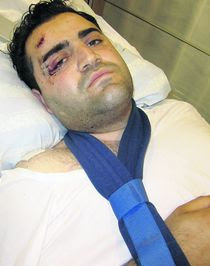 “Attempted murder of Sweden Democrat Issa Issa, 31, who was brutally assaulted with a knife the day before yesterday. Now he’s leaving the party.”
This has been warned about for some time now. The Sweden Democrats, a party that has been badly maligned as “being against immigrants and against immigration” by the whole of Sweden’s political establishment, the media and the academy, while having non-ethnic Swedes in their ranks, like Issa Issa in Gothenburg, are undergoing brutal attacks. The SD party is against mass immigration policies that has been leading to the Islamization of Swedish society.
The retarded political and social life in Sweden, that is a direct result of decades of Social Democrat Party misrule, has led to the present situation, where any deviation from the carefully scripted rules in Swedish society of what is “acceptable thinking”, leads to vilification and mob attack. All sectors of society march in lock step with the other linking arm in arm, it’s bizarre to witness, because only in a highly controlled society could such “herd think” be possible.
SD candidates in the past have been beaten and brutalized in their own homes, while others have had rocks and bottles tossed at them in the streets, one with a swastika having been carved onto his forehead, and now this. Sweden is a society in which George Orwell’s book 1984, has been used as a training manuel. KGS
NOTE: This attack was most definitely committed by Muslims from the immigrant community, they hate Christian Arabs, and how dare one run for the Sweden Democrats that’s trying to put a stop to their immigration into Sweden.

The TT was researching for something a few years ago, and came across a report on the Swedish Lutheran website concerning their parishioners attitudes towards Muslims and Islam. The report (I will have to search for it and repost it here) stated that the more negative attitudes Islam and Muslims in their parishes came from the Assyrian immigrant community. Syrian Christians. It shouldn’t be a surprise, knowing how badly Arab Christians are treated in the Middle East and elsewhere in Muslim majority states.

He leaves the SD after the attack
Sweden Democrat, Issa Issa, 31, is grateful that he’s alive after the brutal knife attack the day before yesterday.
– They said they would kill me, “he says.
Now he’s decided to end his politics and leave the lot.
Aftonbladet interviews Issa Issa at the hospital where he has been given police protection.
Shortly after 22:00 (10:00 pm) on Thursday some stones were thrown into his apartment on the first floor in the angered district in Gothenburg. The windows in the kitchen, living room and bedroom were shattered. Issa and his family had to throw themselves onto the floor.
Outside were two people.
– They shouted “fucking Christian, fucking Sweden Democrat, come down,” said Issa.
Ran after them
His voice barely heard, he has lost much blood and he has been hurt, mostly in the right shoulder.
The boys below the window, ran away when Issa and his brother came out. Issa ran after them.
– It was a trap. Around the corner expecting them was a big crowd, I think 40 people. I tried to go back and called the police while I ran, “said Issa.
Some of the gang fired a weapon.
– I received a blow to the eye. One took out a knife and held it against my neck. Then he stabbed me in the shoulder. Now I’m paralyzed in the right hand, “said Issa.
He was stabbed in the shoulder, back, hand and leg. Someone used a bottle against his head. He was kicked and beaten.
According to Aftonbladet the attackers were young people 15-20 years old. Police are headlining the attack as aggravated assault.
– SAPO was here this morning, “said Issa.
‘Politically motivated’
He is a Christian Syrian, candidate for City Council and stood in fifth place in the Sweden Democrats’ ballot paper for eastern Gothenburg. The party grew from one to three seats in this year’s election.
– People have misunderstood and think that I am against immigrants. That is why I got beaten, “he says.
Now  Issa is leaving the party.
Mikael Jansson, SD President in Gothenburg and on the way into parliament, saying:
– We fear that this attack is politically motivated. Issa has previously, on election day, been the victim of a threat when he was at a polling station and handing out ballots.
Jansson thinks that what happened is extremely serious.
– We are experiencing a hate for us Sweden Democrats. And that other politicians do not take a stand against this.


UPDATE: As promised, here is the report mentioned earlier, about Assyrian attitudes of Muslims and Islam.


The Church of Sweden encounter with Islam
An account of the responses to an enquiry,
January 1997
That was completed twelve years ago. The findings of the study underline the significance of the article, that Assyrian Christians do not have a positive view of Islam or Muslims. I feel that it’s solely due to having lived for centuries in Muslim lands as dhimmis, and forced to shoulder the burden of victimization and discrimination. Here is what the study said about the Assyrians:
Some parishes point out that the presence in their area of Syrian-Orthodox members is a complicating factor in relation to Islam, since this group often has a strongly negative attitude towards Islam. As far as the Church of Sweden is concerned, they prefer to give priority to their relationship with their Christian fellow-believers.