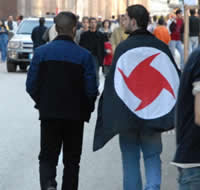 Syrian Social Nationalist Party members
with flag of their movement

Thanks to Dennis Mitzner for the heads up on this story published in the Norwegian paper Aftenposten, about a Syrian lesbian immigrant to Norway, who woke up and discovered just how anti-Semitic she and the Arabs actually are.
The Tundra Tabloids has been reporting on this phenomenon for years, how refreshing it is to be able to point to credible source as proof. Regardless of the OIC sec-gen, Ekmeleddin Ihsanoglu’s denial of Muslim anti-Semitism, it does indeed exist throughout the entire Islamic world, not just in the West were it’s thankfully condemned.


A noteworthy point by Rasmussen, is that the Norwegian Left is part of the problem, it has allowed anti-Semitic views to incubate within the Muslim communities, while their vitriolic campaigns against the Jewish state is seen as approval by this immigrant group. When you have ministers of government taking part in anti-Israel demonstrations where “death to the Jews” are being heard, it only stands to reason that anti-Semitic Muslims believe that their government shares their views.

NOTE: Rasmussen does mention the Syrian Social Nationalist Party (SSNP) was and still is a fascist party, but so to is the Ba’ath, which presently rule Syriaand has done so for over 50 years, as well as in Iraq, up until the fall of Saddam Hussein’s regime by US led coalition forces in 2003.

Also, please take the time to read Dennis Mitzner’s post at the Middle East Cowboy’s blog, they have the sole bragging rights in breaking this monumental story to the English speaking blogosphere. 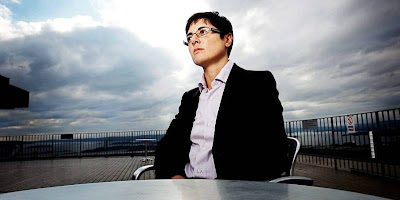 We have demonized the Jews”

Sara Azmeh Rasmussen talks about her anti-Semitic past in an article in Our Country in April. Now she takes a showdown with it.

Society debater and a freelance writer Sara Azmeh Rasmussen does not hide the fact that it has been difficult to tell what she was. She is concerned about the anti-Semitism, she sees it in the Arab and Muslim quarters, but feels she must tell openly about her own past.

“For me it is impossible to talk about anti-Semitic attitudes that the humanist I am today, without making known my past,” she said.

From 1991 to 1993 she was a member of the Syrian Social Nationalist Party (SSNP), a party that in addition to being nationalist was a supporter of a Greater Syria, too, is clearly racist.

– I had decided to take a settlement, it has even controlled  my study choices and I am ashamed that it took so long, “she said.


– The party is racist and anti-Jewish. What was it that attracted you to that?

– Syria was a very closed country. There was uniform and regimedyrkende. I was in opposition to the regime and at the same time afraid of Islamists’ rising popularity. What appealed to me was wiping out the ethnic and religious divides. And the gender perspective was essential. Most members belong to religious minorities and had a more liberal view of gender norms.

– You went out after only two years?

– There were multiple reasons. I was disillusioned and realized that there was a difference between ideals and reality. The requirement for discipline, which I initially perceived as a safety, was difficult to accept.

Today SSNP opportunities to work more openly in Syria. It is represented in the Syrian parliament, and it also has two Lebanese members.

– It is very alarming that a fascist party with a racist ideology, should be so popular. I can find explanations for many young people are attracted. It is a secular party, and many experience Islamism as a threat to their way of life and freedom. But at bottom it is an irrational and dangerous ideology that links rights to race.

Azmeh Rasmussen does not see the fascist anti-Semitism in our part of Europe.

– What is more prominent here is Islamic, religiously based anti-Semitism that exists in the Arab and Muslim communities.

– Increases in the Norwegian society?

– Hatred of Jews has long been flourishing in dictatorships in the Middle East that needed an external enemy. Islamism has a flowering period and uses the Israeli-Palestinian conflict to strengthen its position. In sum, there is more hatred of Jews with different rationales. This made immigration to Europe, where it is channeled through cooperation with extremist groups. In Norway, I mention the Blitz and the Red Party. And at times, SV is not anti-Israeli but anti-Semitic in their statements. Thus, anti-Semitism in Europe more visible.

– It’s a pretty serious accusation against the Norwegian parties.

– Yes, but let’s take SV. When there is call for boycott of Israeli goods and academics, as it creates often indirectly a picture of Israel and Jews as an aggressive and militant people who just want to crush and kill their opponents. There goes all the nuances of what happens on the ground.– How can the clearly racist attitudes countered?

– I have no faith in suppressing the problems. We must have transparency in their presence. It is confirmed that there is growing anti-Semitism, especially among immigrants from countries with Muslim majority. We need more information directed at these communities and we need an open debate and dialogue. My main motivation by telling that I myself was a Jew hater and extremist, is that there is no way to take without an internal critique of anti-Semitism among the people who have roots in the Middle East. Europe is a good starting point for such work.

– Can this have any bearing on the fronts in the Middle East?

– Yes, I think. For me it is not about a settlement to ease my conscience. Now we have new peace negotiations. It is important that Arabs and Israelis sitting around the same words, but I do not think it can lead to peace without complemented by a work against the myth that stick so deeply. In the Islamic religious tradition is the apocalypse stories that the Jews be slaughtered to the last man. We must do something with this. We have demonized the Jews, and we must now refine the picture of them.

– But if we look at the Middle East conflict is not covered both sides fairly nuanced?

– I respond to that part of the left does not make the same moral demands of Arabs and Muslims that they impose on the Israelis. They say they are the weaker party, and the weak should not wait so much. It is stigmatizing for both.

– Negotiation The situation looks bad, and the way long?

– What we’ve talked about is an important key to peace. Here in Norway we can realize the severity of Jew hatred and work with it. I think it may be a drop in the ocean that are needed to resolve the conflict.

With the likes of Kirsten Halvorsen, a minister within the Norwegian government, paling around with open anti-Semites, the job of Sarah Azmeh Rasmussen is going to be an uphill struggle. 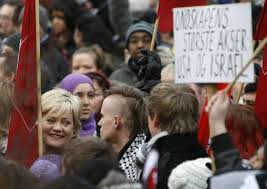 NOTE: Halvorsen smiles while standing in a crowd where “kill the Jews were heard”, and next to a sign that reads “The real axis of evil, the US and Israel”.