Skip to content
Home
/
2010
/
September
/
26
/
Uncategorized
/
INCREASINGLY UK FOOD OUTLETS ARE USING HALAL AND NOT INFORMING THE PUBLIC…….
Facebook
Twitter
Google+
LinkedIn
Pinterest
Well UK shoppers, it’s up to you to put your own foot down, and refuse to buy meat products from certain stores, and make it a point to inform the staff why you’re boycotting them. 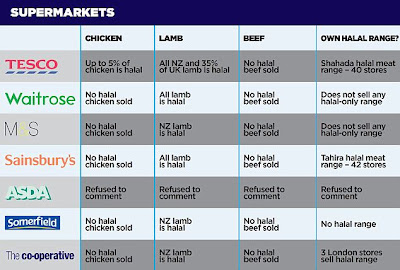 Then there’s the fast food chains’ lunge into the world of Halal, the TT has stopped eating chicken from fast foods a long time ago, you can never tell whether it’s been sliced to the moon god or not. KGS 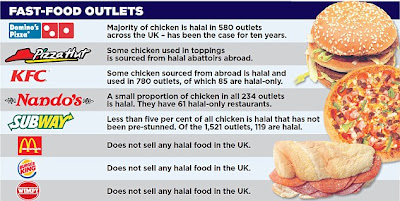 Daily Mail: Britain’s biggest supermarket chains are selling halal lamb and chicken without telling unsuspecting shoppers.
Those stocking meat slaughtered according to Islamic law include Waitrose, Marks & Spencer, Sainsbury’s, Tesco, Somerfield and the Co-op.
And a Mail on Sunday investigation has found that fast-food chains including Domino’s Pizza, Pizza Hut, KFC, Nando’s and Subway are also using halal meat without telling customers.
But the UK’s second-biggest supermarket, Asda, has refused to confirm or deny whether it sells halal meat.
The Mail on Sunday contacted Asda on Tuesday, but by yesterday it had failed to answer any of our questions.
Initially, Waitrose, Sainsbury’s and Tesco were reluctant to admit they sold halal meat. But later they confessed to selling Islamically slaughtered lamb. Tesco also admitted selling some halal chicken without labelling it as such.
Most lamb imported from New Zealand by British supermarkets has been slaughtered according to Muslim law, but this is not mentioned on packaging. Some lamb from British abattoirs is also halal.
Last night, Agriculture Minister Jim Paice said: ‘People should know what they’re buying in the shops or when they’re eating out and I will be discussing with the food industry the role labelling can play in giving consumers a choice.’
Read more: