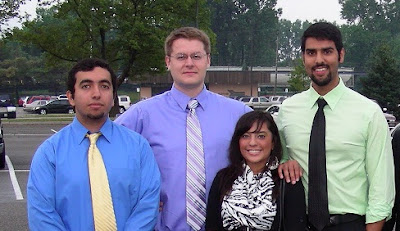 Free at last! Vindicated!
Justice was done. The Dearbon police chief and mayor have thoroughly cast their lot in with the intolerant supremacist Muslim community, (or at least with those who are recognized as the leaders of the Muslim community and speak for them) who can’t tolerate the fact that Christians and anyone else for that matter are allowed to stand on a public sidewalk and pass out literature that promotes their views. It’s entirely immaterial whether the Islamic community is offended or not, the US Constitution defends their right to do just that.
If the good people of Dearborn (a city by the way, where the Tundra Tabloids once worked over at Village Ford decades ago) formed the majority of that city, they would run both the chief of police and the mayor out of office, but since its heavily populated by people who support Hamas and Hezbollah, I don’t see that happening. KGS
The Free Press: A jury acquitted on Friday four Christian missionaries who were accused of inciting a crowd while videotaping themselves proselytizing to Muslims at the Dearborn Arab International Festival in June.
Nabeel Qureshi of Virginia, Negeen Mayel of California and Paul Rezkalla and David Wood, both of New York, were acquitted of breach of peace, 19th District Court officials in Dearborn said after the verdict. Mayel was found guilty of failure to obey a police officer’s order.
The four are members of a Christian group called Acts 17 Apologetics, who, according to the group’s Web site, “refute the arguments of those who oppose the true gospel, most commonly the arguments of Muslims and atheists.” They maintain that Islam is a false religion and inherently violent.
They were charged in July with disorderly conduct after police said they received a complaint from a Christian volunteer working at the festival who said he was harassed by the group.
Dearborn Mayor Jack O’Reilly Jr. said Friday night that he respects the decision, but the missionaries were anti-Muslim bigots pulling a publicity stunt to gain attention on YouTube in order to raise money.
A video the group posted last year about their encounters at the festival has had almost 2 million views. The group solicits money on its Web site when it travels to Dearborn, claiming the city is a hotbed of Islamic radicalism.
“It’s really about a hatred of Muslims,” O’Reilly said. “That is what the whole heart of this is. … Their idea is that there is no place for Muslims in America. They fail to understand the Constitution.”
O’Reilly said people of diverse religious beliefs get along fine in Dearborn. He said several other Christian groups at the festival this year and in years past have never had problems. Other evangelical Christians have criticized the group for their tactics.