Skip to content
Home
/
2010
/
September
/
25
/
Uncategorized
/
AL-QAIDA THREATENS FRANCE NOT TO TRY RESCUING FIVE KIDNAPPED NATIONALS…….
Facebook
Twitter
Google+
LinkedIn
Pinterest
No matter which way you look at it, the situation is lousy. Acceptance of their demands only increases the likelihood for repeat kidnappings, while those being taken captive are more than likely to be killed straight away to avoid their being released in a surprise raid. I see no easy answers here, except for better intelligence in avoiding these kinds of situations. KGS 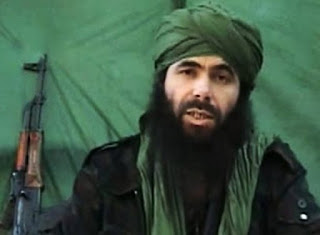 AQIM leader Abu Musab Abdul Wadud:
As long as you are afraid to act against me, I win
DUBAI — Al-Qaeda has warned Paris not to attempt to rescue five French nationals kidnapped by jihadists in Niger, SITE monitoring group said Thursday, as France mobilised its forces to find them.
Al-Qaeda in the Islamic Maghreb posted a statement on jihadist forums in which it said the kidnappings came in the “context of retaliation” promised by AQIM leader Abu Musab Abdul Wadud to France, the US-based group said.
SITE said the statement carried a warning to France that they should not attempt another rescue mission “like they had done for Michel Germaneau” and that the group “will issue their legitimate demands later.”
“In the context of retaliation… a group of heroic mujahedeen under the command of Sheikh Abu Zeid, may Allah protect him, were able to break into the French Arlit mining area in Niger,” said the statement carried by SITE.
“Despite the tough military stands in the area and the many security cordons, the lions of Islam were able to go through all the guards and kidnap five French nuclear experts working at Areva,” it said.
“We also warn of the consequences should they commit any foolish action again, because it will be doomed to fail and they will certainly pay a heavy price.”
French Defence Minister Herve Morin said Thursday. France hopes to contact Al-Qaeda to hear its demands.