Skip to content
Home
/
2010
/
September
/
24
/
Home Grown Jihad
/
REMEMBER THE MAINE: NEAR WORK ACCIDENT AS BOMB EXPLODES NEAR MOSQUE BUILDING…….
Facebook
Twitter
Google+
LinkedIn
Pinterest
Notice how it’s treated in such a ‘nonchalant sort of way’, when in fact it should be sending shivers up and down the spine, with calls for a serious probe into what was going on with this 13 year old kid. KGS 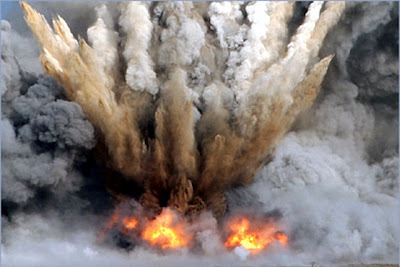 NOTE: If this had been the work of a non-Muslim, you would be hearing about FBI and other state law officials being dragged in to do intensive interviewing for their massive investigations, as well as  branch of CAIR -the Hamas front group and un-indicted coconspirator in the Holy Land Fund trial in which five Muslims were convicted- screaming Islamophobia.
PORTLAND, ME (NEWS CENTER) — Police say there were no injuries or damage caused by a chemical bomb that went off in a parking lot near the Islamic Society of Portland.
The bomb went off in the lot between the Islamic Society and Back Bay Grill around 8:00 PM Tuesday night. Portland Police say Islamic elders came forward to tell them that a 13 year old from the Society was experimenting and was responsible for the bomb. Another bomb was also found undetinated.
Police say it’s unclear if charges will be filed against the teenagers.
Via: Jihad Watch and TROP

(WMTW.com) — Windham police say a total of 13 chemical bombs went off in town Tuesday that resulted in two juveniles and an adult being charged with six counts each of criminal use of explosives, a Class C felony. No one was injured in the afternoon incidents.
Travis Carignan, 18, of Westbrook, was charged with criminal use of explosives. The juveniles were 16-year-old males who attended Windham schools, said Sgt. Peter Fulton of the Windham Police Department. The teens combined toilet bowl cleaner and aluminum foil in Poland Spring water bottles for the explosives. A couple mailboxes were damaged by the bombs that went off throughout town.