Skip to content
Home
/
2010
/
September
/
22
/
Uncategorized
/
SKULLDUGGERY IN SWEDISH PARLIAMENT AS PM SEEKS TO REDUCE REPRESENTATIVE PARLIAMENTARY COMMITTEES…….
Facebook
Twitter
Google+
LinkedIn
Pinterest
By hook or crook, the self anointed elite seek to manipulate the democratic process to limit the Sweden Democrats ability to effectively work for their constituency. It’ll backfire of course, locking out the SD from their rightful representation in the parliamentary committees is a stab in the heart of democracy. KGS 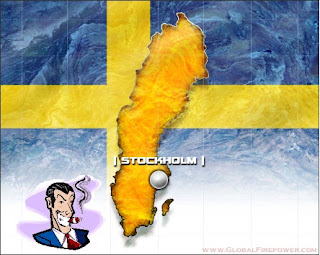 The parties are investigating whether it is possible to shift the make-up of parliamentary committees to reduce the sway of the far-right, anti-immigrant party which was voted into parliament for the first time at the weekend’s general elections, several Swedish dailies reported.
Both Prime Minister Fredrik Reinfeldt’s Moderate Party and the main opposition Social Democrats are reportedly involved.
The far-right party won 5.7 percent of the vote and 20 seats in parliament, according to an initial count.
As things stand, that would be enough for it to automatically have a representative on parliamentary committees, which today count 17 members each.
But the Moderate Party was investigating the possibility of cutting the number of committee seats to 15, the Aftonbladet daily among others reported, citing unnamed sources.
Such a move would block the Sweden Democrats from representation on the committees and reduce their influence in parliament.
MORE HERE
NOTE: The very thing the self anointed elite fear, is debate, which is what they will be forced to do once the SD becomes a permanent fixture in the Riksdag.