Skip to content
Home
/
2010
/
September
/
20
/
Sweden Democrats
/
SWEDEN ‘ANTI-RACISTS’ DEMANDS VOTE FOR ALL IMMIGRANTS STEPPING OFF BOAT……..
Facebook
Twitter
Google+
LinkedIn
Pinterest
This speaks legions of the Left’s agenda, which focuses on immigration as a means to not only prop up the failing welfare state, (the TT never quite fully understands the logic of the policy) but also as a means to bolster their own numbers. For many within the Left, “let em all in  to vote right away, regardless of whether they are loyal to Sweden and its values” doesn’t sound like a bad option.
Thanks to Reinhard who alerted the TT to the story, and for delivering the following salient point: “And people wonder why the SD got in: “anti-racists” want to rewrite Swedish laws so that immigrants can vote in the elections without having to wait for three years.”
You bet they do, and the ruling “Right-wing” coalition, if they continue with the same immigration policies that focus on under educated immigrants, instead of what the Finns have pretty much agreed upon, -that being, educated immigrants that suits Finland’s own best interests, and only during periods of low unemployment- then they will eventually lose votes to the SD party as well.  KGS 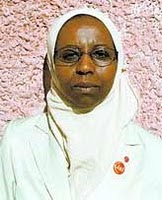 Mariam Osman Sherifay
President of the Center Against Racism
Born in the wrong country and excluded
Published: September 19, 2010, 04:33. Last update: 19 September 2010, 08:28
DISCRIMINATION. The provisions of the Electoral Act is a direct and unfair discrimination. Approximately 100 000 nationals registered in Sweden are excluded, solely because they happen to be born in the wrong country, for a series of representatives of organizations of discrimination.
Universal suffrage was introduced in Sweden after a century of democratic struggle and after several political battles. Gender, income and wealth was long restriction order to vote in 1945 and disappeared on the last restriction on which even those who had received poor relief vote. The right to vote is considered as the most important milestone in representative democracy.
But still universal suffrage is not on equal terms to all who live and work in Sweden. Electoral law excludes people from outside the EU. Voting rights in Sweden are still not public, or the same for everyone.
Swedish citizens who are 18 years old on or before election day and who are registered in the county or municipality has the right to vote for county and municipal councils.
The same condition also applies to those who immigrated from Europe, Iceland and Norway. The other, people who have migrated and who are registered here but are from countries outside the EU, must wait three years before they may vote in municipal and county elections. They are therefore not eligible for election to our democratic assemblies and may not be elected to the local governments. These are nearly 100 000 registered residents in Sweden who are excluded, solely because they happen to be born in the wrong country.
[…]
The provisions of the Electoral Act is a direct and unfair discrimination against people who live, work and are registered in Sweden. A Polish economist who works in Sweden may vote with immediate effect while an economist who is from Somalia or the United States must wait for three years. We have an electoral law that is clearly discriminatory against haze non-Europeans. Here you can really talk about a state sanctioned exclusion, an exclusion of democracy.
Several public inquiries over the years have suggested that this state discrimination should be abolished, but the question has always been ignored by Parliament. Committee on citizenship requirement in Swedish legislation (SOU 2000:106) had already proposed for over a decade ago that the three-year rule was abolished.