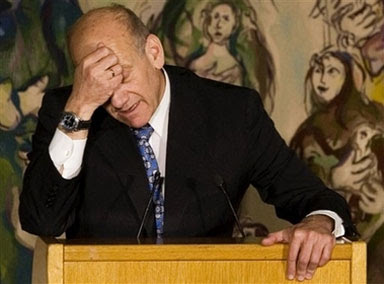 Ehud Olmert: I had peace almost in my grasp…not
This is one of the reasons why Ehud Olmert is considered, as a politician, a screw up,  and someone whom the majority of Israelis wouldn’t want to guard a dog pound, let alone the Jewish state. It’s also why his Kadima party has been relegated to obscurity, as well as for its miserable handling of the  Lebanese/Hamas-Israeli war a few years ago.
The man cannot be trusted, like Ehud Barak, to manage Israeli’s security issues and guide the Jewish state through difficult negotiating cycles with the US, especially one under the present administration. One can hardly imagine an Olmert stading as tough to Obama’s pressure like Netanyhau has been able to do.
This is the time to address the issue of Jewish refugees, and the agreements between the US and Israel under the Bush and Sharon years where settlements are concerned. There is also a need to address the real number of the Arabs (now called Palestinians) who are truly refugees, whose numbers hover around the 200 000 mark, the rest are just relatives of those who left the area for one reason or the other. Time for the Israeli government to demand factual accounting of the historical record, and not swallow whole the manufactured sound bites from the Arab propaganda department.
As for the US taking in 100 000 Arabs as a good-will gesture, that’s lunacy. That would be taking in half of the number of actual remaining refugees. Let the Saudis take in the remaining 200 000 if they are serious in helping to end the conflict. Truth be told, Ehud Olmert is just one more politician who completely misreads the key, core issue that drives the conflict, anti-Semitism that’s burst into open jihad because the Arabs have been given one sign after the other that Europeans and the Left at large, share their dislike for the Jewish state. KGS
What about these refugees Olmert? J’lem Post: The US would have accepted 100,000 Palestinian refugees had Palestinian Authority President Mahmoud Abbas accepted then-prime minister Ehud Olmert’s diplomatic overtures in 2008, Olmert said on Sunday.
In a speech sponsored by the Geneva Initiative at Tel Aviv’s Eretz Israel Museum, Olmert outlined the offer he made the Palestinians at the end of his premiership, which included a contiguous Palestinian state, transferring control over Jerusalem’s “holy basin,” an area including the Old City, to the stewardship of five countries, and accepting thousands of Palestinian refugees into Israel on humanitarian grounds.