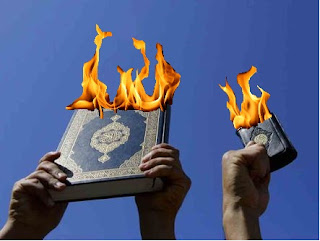 Andy brings up a very good point in his latest entry at Breitbart’s Big Peace, concerning the submissive dhimmi mentality many westerners have in regards to Islamic intimidation. The Tundra Tabloids can guarantee with an almost 99.9% certainty, if it was a New Jersey public employee filmed burning a copy of the New Testament to protest Christian fundamentalism, he wouldn’t have been fired. If by chance he was indeed let go by the New Jersey government, they would be slapped with a law suit by the ACLU so hard and so quick that the ink on the papers being served at the N.J. city hall, wouldn’t have had time enough to dry.
This is what happens when an extremely intolerant ideology gets the red carpet treatment from leaders in both public and private sectors, mostly in part because there’s always the hint of intimidation lurking in the background, and that its adherents comprise a minority of society. In the Western world today, a minority is, by default, treated differently than those in the majority, especially here in Europe. That’s the difficult web that needs untangling in order to properly address the situation. There needs to be equal treatment for all, no special classes of people, but alas, identity driven politics has thoroughly corrupted society.
Anyways, Andy has an interesting insight on this situation with the state of New Jersey serving this civil servant his walking papers for acting on his constitutional rights as an American to demonstrate his opinions, that highlights the historical Islamic perspective on how the non-Muslim is to be treated, and expected to behave. Someone should send the New Jersey Governor, Chris Christie, a copy of it, he needs to read it. KGS
Burning the Constitution with the Koran

Andy: […] The cultural relativist self-loathing in our society that abets this process—as exemplified by the NJ Transit’s firing of Mr. Fenton—smacks of the submissive dhimmi mentality Islam imposes with the ongoing threat of violence upon non-Muslims living under the Sharia. This perverse spectacle brings to mind a remarkably candid assessment by the 18th century Moroccan Sufi “master” Ibn Ajibah from his Koranic commentary, a work I was made aware of by my colleague, Dr. Mark Durie. Describing unabashedly the purpose of the humiliating Koranic poll tax (as per Koran 9:29) of submission for non-Muslims brought under Islamic hegemony by jihad, Ibn Ajibah makes clear the ultimate goal of its imposition was to achieve what he called the death of the “soul”, through the dhimmi’s execution of their own humanity:
[The dhimmi] is commanded to put his soul, good fortune and desires to death.  Above all he should kill the love of life, leadership and honor. [The dhimmi] is to invert the longings of his soul, he is to load it down more heavily than it can bear until it is completely submissive. Thereafter nothing will be unbearable for him. He will be indifferent to subjugation or might. Poverty and wealth will be the same to him; praise and insult will be the same; preventing and yielding will be the same; lost and found will be the same. Then, when all things are the same, it [the soul] will be submissive and yield willingly what it should give.  [Tafsir ibn ‘Ajibah.  Commentary on Q9:29. Ahmad ibn Muhammad Ibn ‘Ajibah]
Read it all here