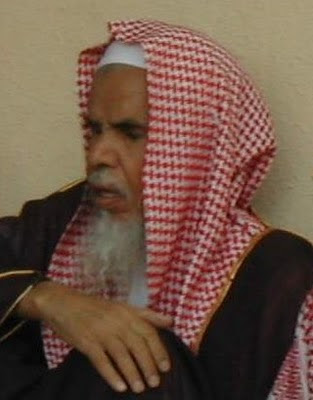 Saudi sheikh ‘Abd Al-Rahman bin Nasser Al-Barrak:
The West may choose to ignore the true meaning of jihad,
but they can never truly run away from the true meaning
Fjordman just dropped this one on my lap-top. It pretty much cuts through all the crap Muslim taqiyya artists, leftist intellectuals and their enablers on the right say about the jihad, and what sharia actually means. Nothing like the honest men of Islam speaking their minds on what they believe is the guiding truth of their belief, in the birthplace of jihad and political Islam. KGS
MEMRI: Saudi sheikh ‘Abd Al-Rahman bin Nasser Al-Barrak, a former lecturer at the Imam Muhammad bin Sa’ud Islamic University in Riyadh,[2] posted an article on his website albrrak.net titled “Jihad for the Sake of Allah is the Height of the Summit of Islam.” In it, he stated that jihad against the infidels is an eternal and most important commandment of shari’a, and that its supreme goal is to make the word of Allah supreme.
Quoting from the Koran and the Hadith, he stressed that jihad is still a source of honor for Muslims, and that its absence is a source of their humiliation. Al-Barrak added that if the enemy is amenable to reconciliation, and this serves the interest of Islam and of the Muslims, they may reconcile with him, but only temporarily, not permanently – as the Prophet Muhammad did with the Jews concerning Al-Madina.
Al-Barrak set out several laws of jihad for the sake of Allah: Muslims must make ready their strength to the utmost of their power for jihad against the infidels;[4] Muslims may take infidel fighters captive, but only after they smite them with the sword and bind a bond firmly on them;[5] in the event that the Muslims are victorious over the infidels in war, they may take booty and captives – including the wives and children of the infidel fighters – and may enslave them.
Here, Al-Barrak noted that today, the U.N. has forced the Muslims to abolish the law of slavery which is one of the laws of jihad – “while the countries of unbelief and tyranny that arbitrarily control the U.N.’s laws subjugate the weak peoples in the name of reform… and colonialism still exists in every Muslim country where there is occupation.”