Skip to content
Home
/
2010
/
September
/
7
/
Uncategorized
/
INTENDED KORAN BURNING CEREMONY CREATES BROUHAHA ABROAD…….
Facebook
Twitter
Google+
LinkedIn
Pinterest
For the record, the Tundra Tabloids’ good friend and colleague, Vlad Tepes, made a video of his Koran burning, and if you’re not into the actual burning itself, the classical music being played is more than enough reason to watch the entire video. The entire brouhaha surrounding the burning of the Koran rests on the understanding that it’ll enrage the Muslim masses around the world, causing them to commit all kinds of violence and mayhem, even to the point of putting US troops in harms way. 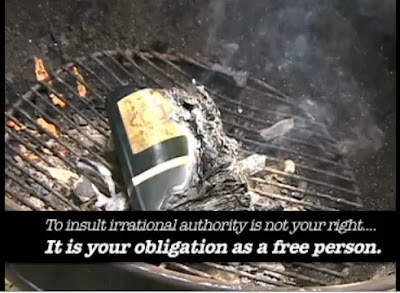 The TT takes a different approach to the intended Koran burn, that it’s a thankless job that someone has to do, but do nonetheless. Those of us living in the free world, meaning Christians, Jews, Hindus, animists and atheists etc., refuse to be bound by the dictates of the Muslim and his inner mohamed, we simply refuse to have the yoke of dhimmitude placed upon our necks. It’s not an option. (continued below the vid)

No doubt that there are plenty of those outside the debate who think burning the Koran to be in bad taste, and they’re right, it is, however, it has to be done regardless of whether it’s both an act of bad taste and Muslims will riot. The Muslim must be forced to understand that people of other faiths and of no faith at all, will not submit to their whims, their prophet, and his book, they do not control their lives, and the more they push themselves upon the ideologically diverse, the more they will fight back, and yes, that means burning Korans, perhaps even by the truckloads.
There are even those within the anti-jihad movement who have come out against the Koran burning, and that’s their right, but the argumentation used against it doesn’t convince the TT. The argumentation being used by some against Terry Jones, the pastor of the Dove World Outreach Center in Florida, who organized International Burn a Quran Day for September 11, is that by doing so, it will cause others to look badly upon on the Counterjihad movement, and use the burning against it.
Well who said being against the Islamization of the West is going to earn you the praise of the media and Islamic communities anyway? No, like the TT said, it’s an entirely thankless job, but necessary nonetheless, because nothing else will force the Muslim to take notice that the people of diverse beliefs and ideologies refuse to be shackled by Islam and its system of rules, sharia, and if it takes a drawing of Mohamed or burning of a Koran, so be it.
In a different world, the Tundra Tabloids would of course condemn the intentional giving of offense that such an act would bring, but we’re not living in a different world, we’re living in the present one where the highly radical ideology called Islam feels itself to be of great influential importance. We live in a world where the Organization of the Islamic Conference has exerted great pressure and influence within the UN, to try to make it a crime to speak critically of Islam.
We live in a world where Saudi and other ME state petrol dollars are busy funding mosques in the West that spread fundamentalist 7th century Islam, and buying loyalty for their agenda from federal, state and local politicians. Little by little Islamization whittles away at our basic freedoms, while the politicians speak of tolerance and societal cohesion, and hey, the TT is all for that, but only if the other side is doing so as well, but they’re not.
So for the record, the Tundra Tabloids -while emphasizing that if not for the extreme situation of the times- approves of Koran burning until Islam finally rejects the violent and anti-human rights components of the Koran, sharia, and the military jihad,  with visible changes in all their established seats of Islamic learning and being enforced by one fatwa after the other. Until all this takes place, Koran burning is not only logical, it’s a must. KGS
NOTE: The Gates of Vienna has this to say about the issue.