Skip to content
Home
/
2010
/
September
/
5
/
Uncategorized
/
FRANCE: JEWISH TEACHER SUSPENDED FOR TEACHING TOO MUCH ABOUT THE HOLOCAUST…….
Facebook
Twitter
Google+
LinkedIn
Pinterest
Lets see now, the French government turns a blind eye to open intimidation in the streets of France, as multitudes of Muslims flaunt French law and take over these streets every Friday to pray, and a lone woman teaches her class about the Holocaust, and it “violates” French law. Ah huh, yep..right. KGS 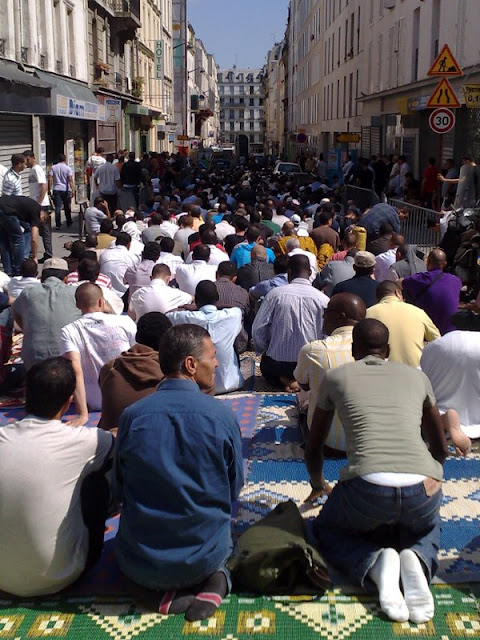 Jewish teacher suspended in France for teaching ‘too much’ about Holocaust
A high school history teacher is accused of ‘brainwashing’ her students, says French news agency AFP.
French history teacher in Nancy, France, has been suspended for breaching the principle of secularism and neutrality after the French education ministry concluded that she was teaching “too much” about the Holocaust and spending too much time organizing trips for her students to Nazi death camps in Poland and the Czech Republic.
Catherine Pederzoli, 58, was investigated by officials at the education ministry, who released a report about the matter in July. The report accused the teacher of “lacking distance, neutrality and secularism” in teaching the Holocaust, and of manipulating her charges through a process of “brain-washing,” according to the French news agency AFP.
In December, when the French Minister of Education Luc Chatel was visiting Pederzoli’s high school, several of her students staged a protest over the decision to cut in half the number of students traveling to Poland on an upcoming trip, meant to acquaint the students with Nazi camps in the region. Pederzoli was accused of inciting the protest.
The principle of secularism and neutrality in France is meant to protect the separation of church and state. The ministry’s report cites that in meeting with investigators, the teacher used the word “Holocaust” 14 times while using the more neutral term “massacre” only twice.

Pederzoli’s lawyer, Christine Tadic, said Tuesday that Pederzoli had been organizing trips to concentration camps for the past 15 years, but that a change in the school’s administration in 2007 had led to a witch hunt against her.

Tadic claimed that “had the teacher been Christian, no one would have accused her of brainwashing.” Furthermore, she asked whether Pederzoli is in fact being blamed for being Jewish.
More here.