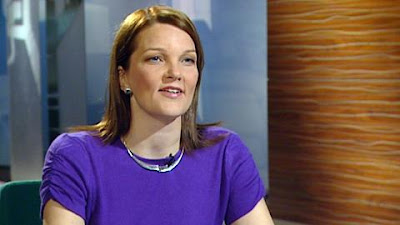 Finnish PM, Mari Kiviniemi: Why let the Swedes and Norwegians
have all the fun, I want Finland in on the peace racket too!
Being cynical, perhaps, but I’m not too far off the mark, the peace industry (a.k.a. racket) is just too tempting for the nordic region, and with a mecca-crap load humanitarian racist politicians and bureaucratic hacks on hand to “offer a hand”, well, you know how it’ll all turn out. The Arabs’ conflict with Israel will be high on the “things to get involved with list”, and we have the former Finnish president, Martti Ahtisaari, who has his paw prints all over the miscarriage called Kosovo, as proof of what they are capable of. KGS

YLE: Prime Minister Mari Kiviniemi says that Finland wants a more prominent role as a mediator in international peace efforts. In an interview Saturday with YLE, the Prime Minister said that she will be calling upon all the political groups in Parliament, including the opposition, to discuss how Finland’s role can be strengthened. She added that she has already discussed the matter with President Tarja Halonen.
“This should be a national project, not just the Prime Minister’s,” Kiviniemi told YLE.
On Friday Finnish Foreign Minister Alexander Stubb and his Swedish counterpart, Carl Bildt, proposed the EU establish its own peace institute funded by all member states. However, Kiviniemi stressed the desire to raise Finland to the position of a major player in mediating peace efforts.
SDP ready to participate
Appearing in the same YLE interview programme, the secretary of the Social Democratic Party, Mikael Jungner, reacted with interest to the Prime Minister’s proposal.
“This is an important issue and an interesting idea. Thanks for the invitation, we’re sure to be there,” said Jungner
More here.