Skip to content
Home
/
2010
/
September
/
2
/
Uncategorized
/
MORE TERRORIST ATTACKS BY HAMAS AS ANOTHER VEHICLE IS TARGETED BY FAKESTINIAN HAMAS TERRORISTS…….
Facebook
Twitter
Google+
LinkedIn
Pinterest
As for “derailing the peace process”, there is nothing for Hamas to derail, there is no such thing as a “peace process” and there is no Arab leader or movement within the camp that calls themselves “Palestinians” who wants to end their conflict with the Jewish state. Obama is wasting more taxpayers money in trying to achieve his place in history as “having played a part in solving the conflict”. 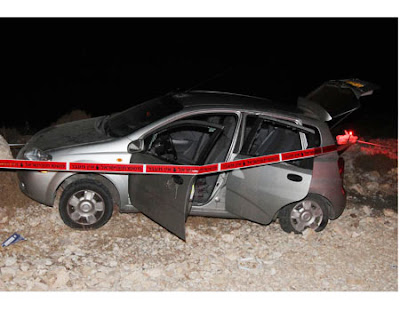