Folks, take a look at how the German Foreign Minister and his Development Minister works. A friend relates the following to the Tundra Tabloids: “First they refuse to label Israel hatred within their party as modern anti-Semitism, but they are attacking Sarrazin who has merely expressed “philosemitic” comments about Jews.”

The political elite are hopeless, and that definitely means both sides of the aisle in European style politics. The multi-culti ‘PC’ elite are deeply entrenched in their multiculturalist project   (importing vast amount of anti-liberal Muslim immigrants) to the detriment of every European, and anyone who dares to speak up about it, or gasp, against it, will find themselves forced on a long walk off a very short pier.

Thilo Sarrazin is being railroaded in much the same way as Paul Wolfowitz was forced out of the World Bank, after his girl friend was given a raise in pay in the organization, an in spite of the fact that Wolfowitz himself asked that he be recused from any decision making processes concerning it. He was told by the ethics committee at the WB that it would not be a problem, then the trap was set, they immediately turned on him (because of all the planned changes he would bring to the WB) and had him sacked.
Sarrazin is being railroaded in much the same way, there is nothing of substance in the accusations against him, he is just one big pesky problem who they want to get rid of in order to please the Turks.  KGS 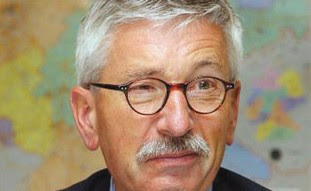 Thilo Sarrazin: Being railroaded am I

BERLIN – “Everyone’s against Sarrazin!” was the headline that Bild,Germany’s largest daily newspaper, chose for its Tuesday issue. Deutsche Bundesbank board member Thilo Sarrazin has sharply criticized both German Muslims for failing to embrace integration and Islam for its tendency to lead to terror.
Sarrazin, 65, a former Social Democratic finance commissioner for Berlin state (2002- 2009), has become, according to some observers, the subject of a feeding frenzy by the German media and political establishment, which is turning an unconventional thinker into a pariah.
“What did he say that was so sensational? You can look up all the facts. You can see – Germany supposedly loves people who think outside the box. But Germans don’t trust non-conformist opinions. That’s why this witch-hunt is happening,” the well-known German-Jewish journalist Henryk M. Broder said.
While Turkish and Islamic organizations have accused Sarrazin of racism and damaging Germany’s reputation abroad, the prominent German- Turkish sociologist and best-selling author Necla Kelek, who has defended Sarrazin, introduced him at a Berlin press conference on Monday attended by roughly 300 journalists, a number normally reserved for Chancellor Angela Merkel’s infrequent press appearances.
Kelek said Sarrazin addressed “bitter truths” in his new book and the chattering classes have judged it without reading it.
What first triggered the controversy surrounding the publication of the book, Germany Abolishes Itself, which appeared in bookstores on Monday, were Sarrazin’s comments about Islam and Jews.
Regarding Islam, Sarrazin said, “No other religion in Europe makes so many demands. No immigrant group other than Muslims is so strongly connected with claims on the welfare state and crime. No group emphasizes their differences so strongly in public, especially through women’s clothing. In no other religion is the transition to violence, dictatorship and terrorism so fluid.”
While Sarrazin has tapped into a raw nerve among the politically and socially correct elites of Germany, which roundly slammed him for his language, his critique of Muslims and his right to articulate his views enjoy widespread support within mainstream German society. Polls have revealed extraordinary levels of approval for Sarrazin, ranging from 85 percent to 95% of those questioned.
The first edition of his 460- page book (25,000 copies) promptly sold out, and a second edition of 15,000 was quickly purchased, prompting a third edition (70,000) and a fourth (80,000) to be commissioned.
CNN Turkey said on its news site that “The Netherlands has their Gert Wilders. Germany has its Thilo Sarrazin.” Wilders, leader of the Party for Freedom in his country, has waged a campaign against political Islam in the Netherlands. The Sarrazin debate had dominated the Turkish press.
The furor associated with Sarrazin’s book has led to a bizarre wave of anti-intellectual hysteria, triggering leading German politicians and journalists to trash Germany Abolishes Itself without having read it. A bookstore in Hildesheim, 30 km. southeast of Hanover, announced the cancellation of Sarrazin’s first public reading on Thursday due to “security concerns” in connection with a group called “Alliance against the Right.”
The Alliance has urged on a poster that Sarrazin be kidnapped.
More here