Skip to content
Home
/
2010
/
August
/
28
/
Arab Lobby
/
NEW BOOK BY MITCHELL BARD ON ARAB LOBBY GETS TO THE HEART OF THE MATTER…….
Facebook
Twitter
Google+
LinkedIn
Pinterest
And the anti-Semites and anti-Israel naysayers believe that the Jews control Washington, while Arab money flows to the jihad, mosque building and dawa and to corrupting US politicians and US institutions. I’m sure that the Tundra Tabloids good friend and colleague TINSC has something to add about this aswell, since he’s followed their money trail for years. KGS 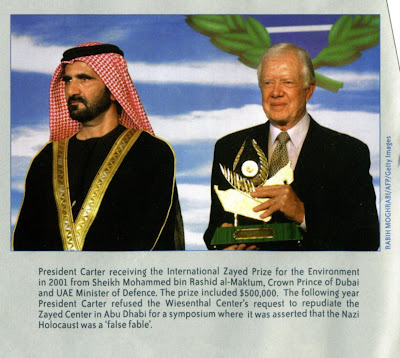 New book: Arab lobby rules America
New book by Mideast expert Mitchell Bard claims Arab lobby, headed by Saudis, ‘has unlimited resources to try to buy what they usually cannot win on merits of their arguments’
WASHINGTON – The Arab lobby and most particularly the Saudi lobby, one of the strongest in America—even stronger than Israel’s, according to a controversial new book penned by an American expert on the Middle East.
Mitchell Bard’s “Arab Lobby” was written as a sort of response to those who warn of AIPAC’s influence over Washington. Bard, who serves as executive director of the nonprofit American-Israeli Cooperative Enterprise (AICE), claims that “one of the most important distinguishing characteristics of the Arab lobby is that it has no popular support. While the Israeli lobby has hundreds of thousands of grass root members and public opinion polls consistently reveal a huge gap between support for Israel and the Arab nations-Palestinians, the Arab lobby has almost no foot soldiers or public sympathy. It’s most powerful elements tend to be bureaucrats who represent only their personal views or what they believe are their institutional interests, and foreign governments that care only about their national interests, not those of the United States.
“What they lack in human capital in terms of American advocates, they make up for with almost unlimited resources to try to buy what they usually cannot win on the merits of their arguments,” he writes in the book.
Due to this lack of support, according to Bard, “The Saudis have taken a different tact from the Israeli lobby, focusing a top-down rather than bottom-up approach to lobbying. As hired gun, J. Crawford Cook, wrote in laying out his proposed strategy for the kingdom, ‘Saudi Arabia has a need to influence the few that influence the many, rather than the need to influence the many to whom the few must respond.'”
Attorney Alan M. Dershowitz wrote about Bard’s book in The Daily Beast: “The primary means by which the Saudis exercise this influence is money. They spend enormous amounts of lucre to buy (or rent) former state department officials, diplomats, White House aides, and legislative leaders who become their elite lobbying corps. Far more insidiously, the Saudis let it be known that if current government officials want to be hired following their retirement from government service, they had better hew to the Saudi line while they are serving in our government.
“The former Saudi ambassador to the United States, Prince Bandar, who was so close to the President George H.W. Bush that he referred to himself as ‘Bandar Bush,’ acknowledged the relationship between how a government official behaves while in office and how well he will be rewarded when he leaves office. “If the reputation then builds that the Saudis take care of friends when they leave office, you’d be surprised how much better friends you have when they are just coming into office,” the lawyer wrote.
Bard concludes that “given the potential of these post-retirement opportunities, it would not be surprising if officials adopted positions while in government to make themselves marketable to the Arab lobby.”