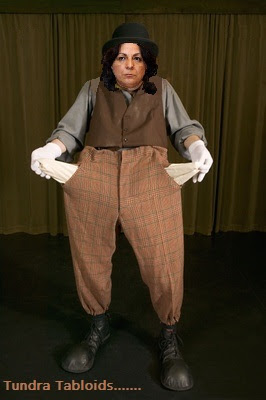 Daisy Con: Honest Muslim
We be all plum broke!
Everything that can be wrong about this project, is wrong, all one needs to do is to follow the money trail, and lack thereof, like the Investigative Project has been doing, as well Christine Brim over at Breitbart’s Big Peace, Pamela Geller at Atlas Shrugs and a host of others.
This whole situation stinks, from the moment they threw 4.7 million dollars down to buy the property, all the warning lights and whistles have gone off. What else will it take to get most of the fence sitters to come down and demand the moving of this mega mosque project? KGS
Via The Sheik and Jihad Watch
The Tangled Web of the GZM Imam’s Organizations Raises Questions
The backers of the Ground Zero Mosque have virtually no money, one of the group’s leaders says, and plan to create another nonprofit organization that would further complicate the already labyrinthine financial network surrounding the project.
Daisy Khan, one of the leaders of the project, told supporters over the weekend that the mosques organizers have “nothing in the bank” for their effort. Khan said there is no money and that she doesn’t know of anything that has been raised.
Tracing the money going to the two nonprofit groups led by Khan and her husband and partner in the mosque project, Imam Feisal Abdul Rauf, requires a world map.
Federal tax records show Rauf and Khan direct the two groups supporting the mosque project – the Cordoba Initiative and the American Society for Muslim Advancement (ASMA). Those two organizations, along with Soho Properties, which owns the site of the proposed mosque and community center, are coordinating the project.
However, federal tax records show the Cordoba Initiative has not listed contributions from at least two charitable foundations that have supported its activities. In another case, a foundation gave money to Cordoba’s sister group, the American Society for Muslim Advancement (ASMA), that was supposed to go to Cordoba; that money was also not listed in Cordoba’s tax records.
Cordoba has failed to list almost $100,000 in charitable donations since 2007, federal tax records show.
Between 2006 and 2008, Cordoba’s charitable tax filings with the IRS show a total of $31,668 in gross receipts. However, tax filings from two charities that have donated to Cordoba or ASMA show more than $130,000 to donations to Cordoba during that time.
They include:
$98,000 from 2006 through 2008 from the Deak Family Foundation, a Rye, N.Y.-based nonprofit organization.
$32,000 from the William and Mary Greve Foundation of New York in 2007.
The Greve foundation also gave ASMA $25,000 in 2008 “to support Cordoba Initiative in improving Muslim-West relations.” There is no record in the Cordoba Initiative’s tax filings that shows it received $25,000 from ASMA. Greve foundation officials did not respond to requests for comment.
The Deak foundation’s contributions to Cordoba were routed through ASMA, the religious organization Rauf founded in 1997 as the American Sufi Muslim Association, said R. Leslie Deak, the foundation’s director. The Deak foundation has also given more than $100,000 between 2006 and 2008 to the National Defense University Foundation. That group supports activities at the National Defense University, a Pentagon think tank in Washington.
However, Cordoba’s tax filings between 2005 and 2008 show no contributions from ASMA.
More here.