The Tundra Tabloids hope they go after this twerp, and that he’s intercepted along the way by US law officials and held, tried and convicted for aiding and abetting the jihad. KGS 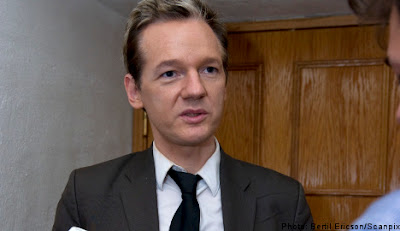 Ass-ange: Oh it was just a little poke and prod,
just like I do when finding US top secret war material

Wikileaks’ founder Julian Assange is still suspected of molestation, prosecutors in Stockholm have said. Meanwhile, chief prosecutor Eva Finné has rejected criticism of the original warrant for Assange’s arrest.
“This concerns two separate reports from two women,” said Karin Rosander, spokeswoman for the Prosecutor General’s Office.
Chief Prosecutor Eva Finné said she had not yet decided how to proceed:
“I am going to look thoroughly at this and take a view on the question of how to classify the complaints in the coming days. I have not ordered for Assange to be questioned.”
The two women making the allegations, believed to be Swedish, approached police separately, one in Stockholm and one in an unnamed Swedish city.
Finné defended the original decision by a duty prosecutor on Friday night to issue an arrest warrant for Assange for suspected rape:
“I made my decision to reverse that decision one day later, when I had a lot more information to work with,” Finné said. The rape accusations have now been dropped.
Finné’s office could not on Monday say when a decision would be made about whether to take further action against Assange.
More here.