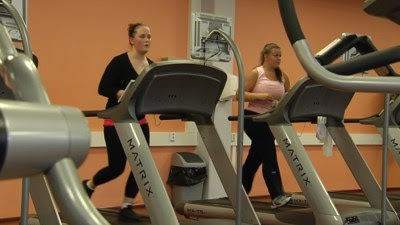 We came here to sweat, not to listen
to the members of the ROP praying

No, it’s not a rogue bunch of Baptists taking up badly needed room in the crowded fitness center dressing room, eating and praying, but members of the ROP. According to the newspaper, Vartti:

Located in the center of Espoo, a women’s fitness center has prohibited praying and dine on their premises. The prayer and eating ban came into effect in the Lady Fitness Entresse last Thursday.
The ban by the fitness center’s owner PCNordensved, came after years of complaints about the current prayer. In his view, a dressing room is not suitable for the use of prayer.
– We have as clients dozens of Muslim women. The dressing room has had rather eye-catching moments of prayer. There have been groups and individuals. I have not seen it since it is a women’s fitness and women’s dressing room.
The gym is located on the premises of the Entresse shopping center. According to Nordensved the women have entered the dressing room to pray, even when they were not exercizing in the gym.
– I’ve heard that when they are shopping in the center and prayer time comes, they come to the fitness dressing room to perform prayers.
Interviewed by Vartti, a woman who frequents the gym tells of worshipers she saw in the dressing room last June.
– She threw her coat on the floor in front of solarium room and stood there quietly. A bit scared initially, but it has not bothered me.
The gym center has also banned from the premises, including food, because some women have dined in the dressing room between the long training sessions.
– Some people will come on a long a day trip to the fitness center and eat in the dressing room. A snack, a bite to eat in the dressing room is certainly not forbidden, but this is about eating, was Nordensved’s opinion.
Are these the same women, who pray in the locker room?
– Not entirely, but pretty much the same crowd. 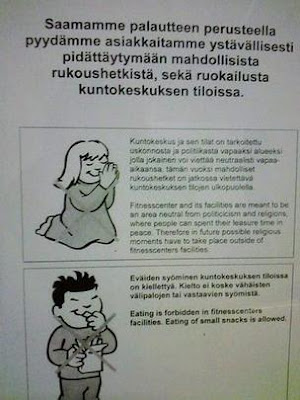 Now since the happening has come to light, the Minorities Ombudsman, Eva Biaudet, wants tp weigh in and see if any “descrimination” has occured. Yes that’s right, a private organization that has its own rules, is now being investigated if it’s in keeping with Finland’s anti-descrimination laws. KGS

Biaudet: It can be discrimination

Minority Ombudsman Eva Biaudet have received news of ban on prayer with astonishment. To consider whether it is about discrimination is still difficult.
– The law assumes that no one may be disadvantaged, and which can also be a call in a particular case can act interpreted as indirect discrimination, “said Biaudet.
She will ask how religion can be disruptive to other customers.

NOTE: It is distruptive to other customers, and up to the private owner of the establishment to set house rules, who no doubt, do not want to walk over other people kneeling on the floor praying or sitting around stuffing their faces. Special thanks to J, Kumitonttu for bringing this to the TT’s attention and for Kullervokalervontalonpoika for the intial story about the Ombudsman investigation.

UPDATE: Helsingin Sanomat weighs in with an article about it. It quotes the Minorities Ombudsman as saying that: the practice of religion is a human right, which is guaranteed by the Finnish Constitution. Finland also has a law on equal treatment. “It applies to the offering of private services. It bans discrimination, both direct and indirect, against people of different ethnic origin.”