The only time Leftists like religion is when it’s aimed at the heart and throat of American ideals and free market captialism. 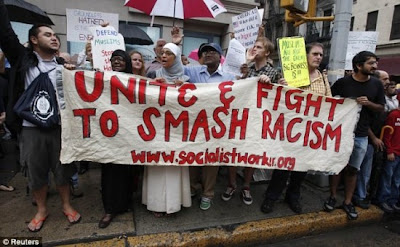 Islamo-socialist nexus in action
It’s pretty obvious and amusing how Leftists work and make asses out of themselves in the process, and yes, they can rely on their cohorts in the media to give them an easy pass because socialists have the special nack in placing specific goals above their own ideals. It’s the “ends justifies the means” type of mentality that keep these jerks always in the spotlight.
Those standing against the Ground Zero mosque face an uphill struggle in getting their message across because of the main stream media, which will use whatever methods at its dispossal to paint these American patriots as goons and bigots…and yes, even “waycists”. 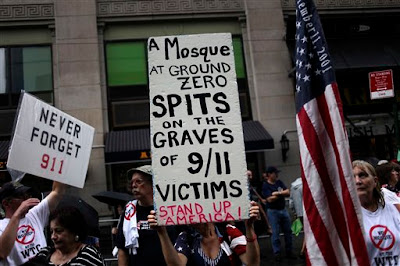 Patriots who refuse to be spat on.
Rallies over mosque near ground zero get heated
NEW YORK (AP) — Hundreds of impassioned demonstrators – all waving American flags, but separated into two groups by police – descended on the site of the proposed mosque near ground zero, with opponents chanting, “No mosque, no way!” and supporters shouting, “We say no to racist fear!”
The two leaders of the construction project, meanwhile, defended their plans on Sunday, though one suggested that organizers might eventually be willing to discuss an alternative site. The other, Imam Feisal Abdul Rauf, said during a Middle East trip that the attention generated by the project is actually positive and that he hopes it will bring greater understanding.
The rallies took place around the corner from the cordoned-off old building that is to become a 13-story Islamic community center and mosque. There were no reports of physical clashes but there were some nose-to-nose confrontations, including a man and a woman screaming at each other across a barricade under a steady rain.
Opponents of the $100 million project two blocks from the World Trade Center site appeared to outnumber supporters. Bruce Springsteen’s “Born in the USA” blared over loudspeakers as mosque opponents chanted, “No mosque, no way!”