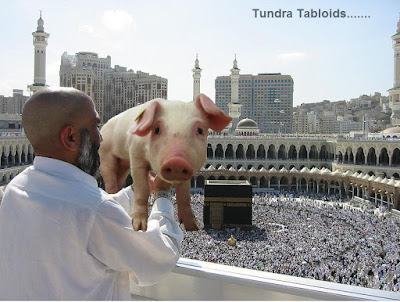 You’ll find a Bumble Bee Ham
in the most unsual of places
If only the picture and the following story were true. KGS
Rancor News: Bumble Bee Ham is opening a processing plant and deli in New York just two blocks away from Ground Zero next to a new mosque. The new location will process ham to be shipped out to Bumble Bee Hams across the country and launch a new high end deli on the ground level called “Bacon.” The feature item is a bacon burger made from ground bacon, topped with bacon served open faced on a bacon croissant with bacon ranch and a side of bacon sticks. This has set off a firestorm between many Americans and Muslims against so-called “bacon extremists.”
Critics claim that Bumble Bee Ham is being insensitive to Muslim feelings and seeking to inflame Muslim sensibilities. Supporters swear they only wish to promote a new peaceful dialogue in Muslim/Pork relations. Imam Faisal Abdul Rauf, the founder of the mosque was reported in the New Pork Times saying, “Most New Yorkers find the placement of Bumble Bee Ham offensive. New York is a big city. Why can’t they just build somewhere else? If they really care about healing delicate wounds between Muslims and Pork they wouldn’t build in a location where most New Yorkers disapprove.”
A spokesman for Bumble Bee Ham responded in the New York Pork declaring, “We have no desire to inflame or insult New Yorkers by inflaming and insulting them. America stands for freedom and we fully believe in that right. Freedom doesn’t include a right to decency or good taste.
We here at Rancor News fully believe in everyone’s right to freedom, however, we do not approve of people using their freedom to be dicks. You don’t build new peaceful relations by kicking someone in the crotch. Just because you can do something doesn’t mean you should. We will stand by Bumble Bee Ham’s freedom to operate where they choose and our freedom to call them insensitive, inflammatory, attention whoring, opportunistic pricks.
Tyson Bam
August 6th, 2010