Skip to content
Home
/
2010
/
August
/
22
/
Gaza
/
LEBANON SHOWS ITS STILL IN IRANIAN-SYRIAN ORBIT WITH LOGISTICAL SUPPORT FOR FAUX AID SHIP TO GAZA…….
Facebook
Twitter
Google+
LinkedIn
Pinterest
Lebanon is heading for a major confrontation with Israel, as the recent broder clash (in which one Israeli officer was murdered by a sniper while the IDF trimmed a tree) shows. Now they’re upping the ante with their support of a ship sailing under the name of, Mariam, that’s planning to break the Israelis’ legal weapons blockade of Gaza.
Remember folks, this is a weapons blockade being imposed for the last 4 years ever since Israel totally withdrew from Gaza and all they got in response for it were Kassem rocket, mortar attacks and border crossings in which IDF soldiers were wounded, killed or kidnapped, like Gilad Schalit.
That is why there is a weapons blockade on Gaza, this has nothing to do with food, medicine and other basic necessities, and everything to do with ensuring that the Hamas has free access to whatever it wants from the outside world, which means more weapons of quality and size to continue to pummel the Jewish state while the IC looks on and yawns. KGS 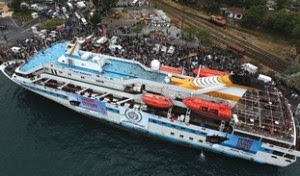 Another ruse “aid ship”, which will be escorted to the
Israeli port of Ashdod and unloaded like the Mavi Marmara
NOTE: Kudos to the Cyptiot government that wants nothing to do with these fake aid ships, and breaking the Israelis’ weapons blockade of the genocidal Hamas.
Lebanon refuses to bow to Israeli warning on Gaza boat
BEIRUT (AFP) – Lebanon refuses to bow to Israel’s warning against granting clearance to an all-women aid boat which plans to sail to blockaded Gaza this weekend,  the transport minister said on Friday. “
We will not respond to the wishes or requests of (Israeli Defence Minister Ehud) Barak, and what he says is of little relevance to us,” Ghazi Aridi told AFP in a telephone interview. “We will continue to exercise our sovereignty and make the decisions we find appropriate.”
Barak warned last month Israel would intercept any ship nearing Gaza and said the Beirut government would be held responsible for allowing flotillas to depart from its shores for Gaza, which is run by the Islamist movement Hamas.
Israel came under international censure over its May 31 seizure of a six-ship aid fleet bound for the Palestinian territory when Israeli commandos shot dead nine Turkish activists in a clash on the lead boat.
The Mariam, a Bolivian-flagged cargo ship originally named Junia Star, plans to leave from northern Lebanon for Cyprus on Sunday at 10 pm (1900 GMT) on the first leg of a planned voyage to Gaza, organiser Samar al-Hajj said Thursday.
The vessel, renamed in honour of the Virgin Mary, plans to carry aid to Gaza in a bid to break the four-year siege of the Strip with more than 50 Lebanese and foreign women activists on board, including local pop star May Hariri.
But Aridi told AFP that there was no guarantee the ship would set off on Sunday night as Cyprus had not yet granted the Mariam authorisation to dock or to depart for Gaza.
The Cypriot government has said the island was keeping in place a ban on the sailing of ships from Cyprus to Gaza.