Well this comes as a great surprise, fair and honest news reporting at the Beeb, but will it air on British television since the anti-Israel hate mob is calling for massive reprisals against the network? 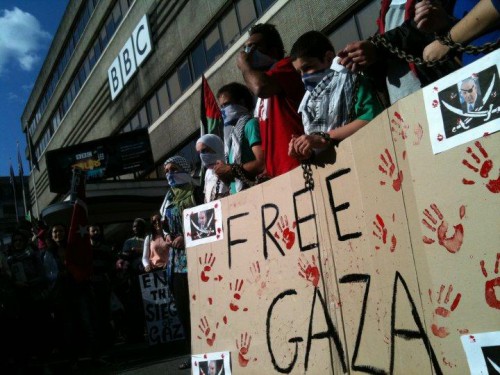 Islamonazis demostrating at an earlier date:
“TRUTH IS RACISM, BIGOTRY AND BIAS”
In an age of sanity where moral clarity and common sense dictates, these idiots would never stand a chance to promote their nonsense with the hope of being heard and influencing public opinion. With morons running many of the major media (BBC included) that have for decades missreported on the Arabs conflict with Israel, they alone are responsible for giving rise to these morons and their propaganda and their intimidation tactics. KGS

LONDON – A BBC documentary screened this week that investigated the Gaza flotilla incident on May 31 is causing a storm of protest – from critics of Israel, who are furious that the program was not as hostile to Israel as they thought it should be.
The critics, including an activist from the Free Gaza movement who was aboard the Mavi Marmara, are organizing demonstrations on Sunday outside the BBC’s London headquarters and other BBC offices, and are calling for a mass campaign of complaints to the BBC in general and the program makers in particular.
In Death in the Med, the BBC’s flagship documentary series Panorama examined the ill-fated Israeli interception of the Mavi Marmara, the only ship from the Free Gaza flotilla which saw confrontation between activists and Israeli troops.
The half-hour program had exclusive access to the Israeli navy unit that took part in the raid and interviewed a number of the commandos, as well as members of the Free Gaza group and the IHH movement that organized the flotilla.
Using previously unseen video footage from the IDF and confiscated passenger tapes, mostly recorded by members of a group called Cultures of Resistance, the program concluded that the main aim of the activists had not been to bring humanitarian aid to Gaza, but rather to orchestrate a political act designed to put pressure on Israel and the international community.
The program also concluded that the Israeli commandos encountered a violent, premeditated attack by a hardcore group of activists organized by IHH members. Nine Turkish nationals were killed by the commandos after they came under attack when boarding the Mavi Marmara.
Sunday’s demonstration outside BBC headquarters in west London is being organized by Ken O’Keefe (TT: lefty moron), one of the Free Gaza activists from the Mavi Marmara, who was interviewed in the documentary, and a group called the Muslim Defense League. 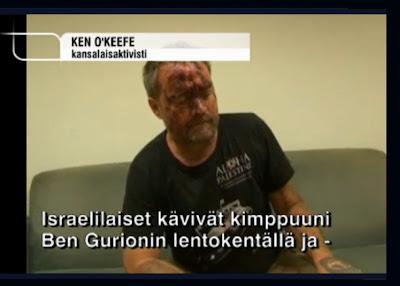 ex-American and traitor Ken O’Keef:
It took me hours to paint this blood on my face, I hope
it makes you believe I was beaten in the Ben Gurion airport
“Enough is enough, we all know the truth of the terrorist attacks committed by Israel on unarmed peace activists! The BBC needs to know that it cannot continue airing lies as the truth,” this group proclaims on its Facebook page. Other protests are being organized at regional BBC offices in Manchester and Belfast.
More here