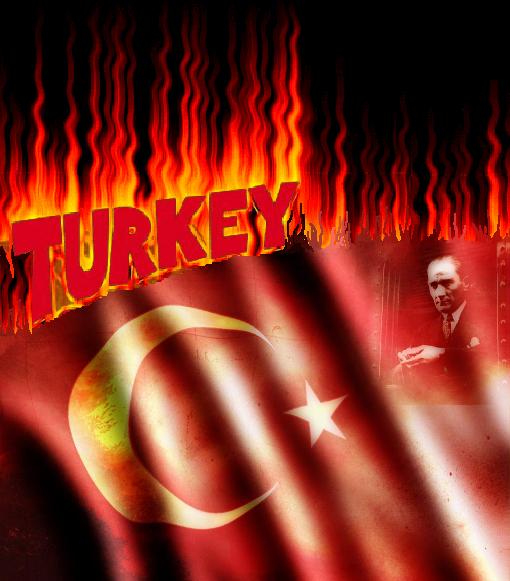 Kemal Ataturk: I wasn’t even cold in the grave,
befor “the pious” began to plot against my modern state
This really does separate the men from the boys. All they (the experts on Turkey) needed to do was to read the same sources that Dr.Andrew Bostom is able to find, and they would have already known for some time now that, the rise of Islam in modern day Turkey began with the death of Kemal Ataturk in 1938.
Turkey has been in decline for some time now, for over 7 decades, and to think during that time they have been able to get into NATO, and at least, apply for EU membership, with some key states pulling for them. Unreal as it is frightening. It isn’t the rise of “Islamism” that has been tugging at Turkey for the past 20 years, especially since 9/11, but Islam itself, and in all of its traditional ugliness.
When Ataturk died, so did his dream of a modern Turkish state built upon western principles, it has been in slow decay ever since, but only recently has that decay been excelerating due to the pull of of Islam in almost every corner of the globe. Please take the time to read Andy Bostom’s post on Eriel Heyd’s observations some 42 years ago about the Islamization of Turkey, back in 1968.
If anyone has been ahead of their time, it’s Uriel Heyd, and his findings are bleak as they are truthfull. It’s something many of us have known for some time now, that democracy and modernity have nothing in common with Islam. So there never can be any such thing as a truly modern secular Muslim state, for long, because it’s a mirage, blue smoke and mirrors, a state that’s just in the process of reaching its full Islamization, no matter what the outside appearances may be. KGS
NOTE: There is no such thing as “Islamism”, that’s a western construct that means nothing to the Islamic world, there is no such thing as, moderate, hardline Islam, just Islam, and the sooner “experts” realize this, the better.
Professor Uriel Heyd (d. 1968) described Turkey’s tenuous secularization and aggressive re-Islamization fully 42 years before todays “learned analysts” have finally come to the same pathetically belated realization…
Since the recent Mavi Marmara flotilla affair—facilitated, and perhaps even orchestrated by the Turkish government—we have been inundated with excruciatingly belated, if not downright delinquent hand-wringing assessments by so-called “expert analysts” of Turkey. These “experts” lament what they view as Turkey’s “precipitous” return to Islamic fundamentalism under the current Erdogan-led AKP regime—as if this dangerous phenomenon emerged suddenly and fully formed from the head of Zeus al-Zawahiri.
A sobering, highly informed corrective to this cacophony of ill-informed Johnny and Janey-Come –Lately “learned analyst” voices was provided by the Israeli scholar of Ottoman and Republican Turkey, Professor Uriel Heyd (1913-1968)—just over forty-two years ago!