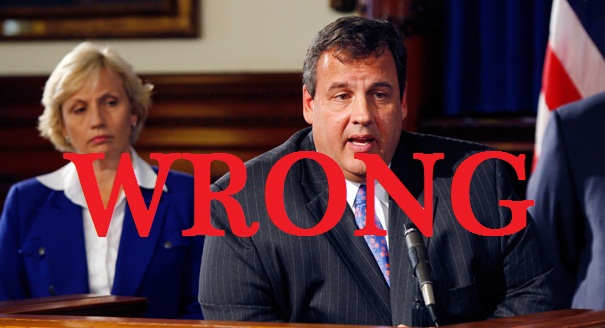 He blew it. Like Mark Levin stated in yesterday’s broadcast, Christie did a big bad by trying to place himself above the debate, and downplay an issue that is amazingly clear, there is a right and wrong. The Ground Zero mosque is a direct provocation, not a constitutional issue, but a zoning issue, and are not being denied the right to build a mosque in general, but just not that mosque,….there.
Obama has just further obfuscated the issue in his setting up of strawmen to then knock them down. This has never been an issue of religion, but one of zoning, and the overwhelming local resistance to that mosque, in light of the historical relevance, being built near hallowed ground. Shame on Gov.Christie for shooting off his mouth and trying to make himself look good. He should issue a retraction…fast. KGS

New Jersey Gov. Chris Christie, a new national icon for the Republican Party thanks in part to his push for pension reforms, on Monday became the most prominent GOP figure to warn against “overreacting” to the threat of terror and painting “all of Islam” with the brush of terrorism amid the swirling controversy about the Ground Zero-area mosque.
The remarks from Christie, who took office in January, were a striking departure from major GOP players like Sarah Palin and Newt Gingrich, who have been adamantly opposed to the construction of the proposed Islamic mosque and cultural center two blocks north of the northern perimeter of Ground Zero – putting them at odds with people like New York City Mayor Bloomberg and, to a lesser degree, President Barack Obama.