Skip to content
Home
/
2010
/
August
/
17
/
Andrew Bostom
/
ANDREW BOSTOM: WILL THE GROUND ZERO MOSQUE IMAM DENOUNCE THESE FATWAS…..?
Facebook
Twitter
Google+
LinkedIn
Pinterest
Go Andy go! This is exactly the tack to take on this radical imam, Feisal Abdul Rauf. The man is anything but a “moderate”, a term by the way, that has long since lost its meaning. An example why: “Moderate? Moderate to what, Adolf Hitler”?
The AMJA has issued a series of highly provocative / intolerant religious rulings, or fatwas, which creates a mighty big dilemma for the Ground Zero Imam, who’s busy spinning on his own behalf, that he’s a moderate etc.. The same imam also refuses to denounce Hamas, which means he hasn’t too much against them. Read what the TT’s friend and counterjihad colleague has to say about the GZ imam, and his big dilemma. KGS 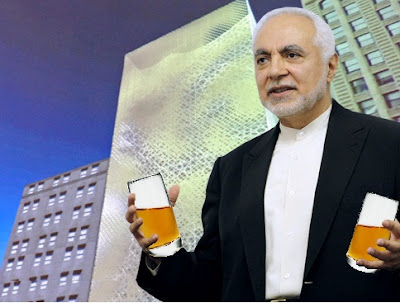 Ground Zero spin meister Imam Rauf:
I’m a moderate Muslim, beer anyone?
NOTE: This imam and the people behind him offer the counterjihad everything it desires on a silver platter, including the beer. What luck for America to have its own Anjem Choudary, and in such a high profile way! The more they push themselves center stage, the more the counterjihad is able to expose their agenda to a wider audience. Excellent!
Real Shariah in America: Will Rauf Denounce These Fatwas?
Feisal Abdul Rauf—the now infamous “moderate” imam doggedly pursuing a triumphal mosque near Ground Zero—has yet another opportunity to confirm his putative “ecumenism.” The Assembly of Muslim Jurists of America (AMJA) has issued a series of traditional Islamic legal rulings, or “fatwas” that are wholly consistent with the Sharia (Islamic Law), but entirely inconsistent with Imam Rauf’s brazen assertion that the Sharia’s “principals of justice” guarantee religious minority (i.e., Non-Muslim) rights and freedom of conscience as steadfastly as these principles are upheld in America’s Bill of Rights and Constitution.
Accordingly, Imam Rauf must denounce the rulings of his esteemed co-religionist Islamic clerics of the Assembly of Muslim Jurists of America issued over the past 4-years which sanction hatred of non-Muslims, including their lethal punishment for “blaspheming” the Muslim prophet Muhammad, and the killing of Muslims who leave Islam, becoming so-called “apostates.”
This task may prove challenging for Imam Rauf given the Assembly of Muslim Jurists of America’s mission statement, maintaining the organization was, “…founded to provide guidance for Muslims living in North America. AMJA is a religious organization that does not exploit religion to achieve any political ends, but instead provides practical solutions within the guidelines of Islam and the nation’s laws to the various challenges experienced by Muslim communities.” Indeed, as Assembly of Muslim Jurists of America cleric Katem Al-Hajj, an Egyptian cleric explained in a 23 pp. 2007 fatwa forbidding US Muslims to work for the FBI or US security services because of the ostensible harm these institutions cause Muslims, Muslim minorities in non-Islamic countries are “…subject to man-made laws, which Islamic law [shari’a] does not recognize, either fully or in part.”
Rauf’s continued failure to repudiate these odious Sharia-based rulings—extracted below—would be concordant with his ongoing refusal to denounce the jihad terrorism of Hamas, providing more evidence that he is indeed a traditional Sharia-supremacist who shares an Islamic societal vision incompatible with America’s founding ideals.