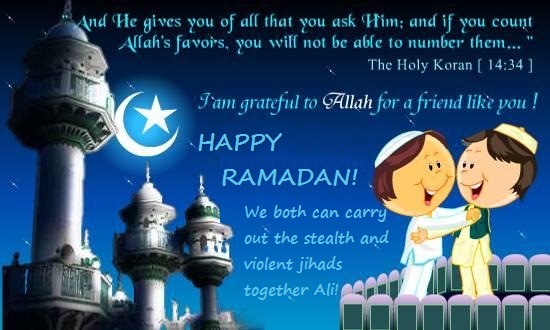 This essay by Iranian-born professor, Mehdi Mozaffari, goes into details of why Ramadan (& Islam) is so full of stupid, strict rules. Remember folks, the more you learn about Islam, the more there is not to like. KGS
Europe News: The demand for discipline, otherwise seen only in the military, is the hallmark of Islam and not merely limited to Ramadan fasting. Every Muslim is a soldier himself, required to believe in one god, one book and one true prophet. Muslims constitute the army of Allah (jundAllah).
Ramadan is, without doubt, the nicest month in the Islamic calendar. One fasts, and one feasts. This corresponds, in a way, to celebrating Christmas, New Year and Easter all at once. For a full month, one eats festive meals twice a day: In the morning before daybreak and once again after sunset, when breaking the fast (iftar).
[…]
Ramadan had a different and more serious purpose, namely to create a stringent discipline, a moral and physical preparation among the men and women who more or less voluntarily had become part of the newly created Umma.
The demand for discipline, which is otherwise found only in the military, is a hallmark of Islam and not restricted to Ramadan fasting. Every Muslim is a soldier in himself, required to believe in one god, one book, and one true prophet.
Muslims constitute the army of Allah (jundAllah). This starts out with submission, implying that one submits fully to the orders of Allah and his messenger, and always is ready to mobilize. And, as demanded by the quran, believing Muslims must be prepared to sacrifice everything they own in the name of Allah: Their property, their families, and ultimately their own lives.
According to the quran, Shaheeds (those who died for the Cause of Allah) are not dead, but instead gain V.I.P. status with Allah. A Muslim has not much freedom for himself, for around the clock he is to fulfil a series of duties ordained by Allah, and all the time have Allah and the prophet Muhammad on his mind. Body and soul are to be permanently at the service of Allah.
It is with a similar purpose that prayers are to be made five times a day. Once before sunrise, once at noon, once in the afternoon, once at sunset and once in the night, Muslims are to submit themselves in a certain direction: Towards Mecca. Further, it is recommended to pray at night, and not to forget Allah while sleeping.
[…]
It is beautiful that all 114 suras of the quran, except for sura 9, has the positive and peaceful opening verse: “In the name of Allah, the Most Gracious, the Most Merciful”. It can be hard to understand how it could be the same ‘gracious’ and ‘merciful’ God who let those not believing in him burn in the eternal fire.

It is encouraging, however, that not all Muslims are literal, and that many Muslims have changed. As long as Muslims use Ramadan as a feast, a time to socialize and enjoy each other, it can be beautiful. Ramadan is also an occasion to reflect on the message of Muhammad, his strategy and his aims.
Any attempt to demilitarize the original message of Islam can only be of benefit to Muslims and the world at large. Just imagine if one day we could condense the message of Muhammad and the quran in one single sentence, stay with that, and leave behind the rest.

A beautiful sentence, full of significance, love and tolerance:

“In the name of Allah, the Gracious, the Merciful.”