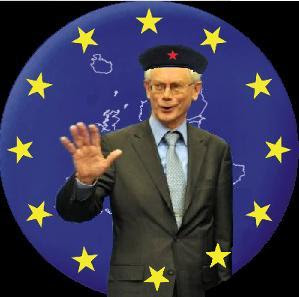 Herman Von Rompuy: Oh, didn’t we make that clear
when we rammed through the Lisbon Treaty?
This is exactly what the Tundra Tabloids has warned about for years, the EU has dismantled the nation states, their sovereignty and their own rule of law. The political EU elites rule by fiat, and as this article shows, even key heads of states as well as their ambassadors were caught off guard, or at least it appears to be the case, as the British ambassador to the US has just received his walking papers. Now the EU ambassador speaks for all the member states. KGS
Telegraph: Joao Vale de Almeida was this week formally installed as the EU’s ambassador to the US, and suggested that American officials should regard him as their first point of contact for transatlantic discussions.
He is the first EU ambassador to be appointed after the controversial Lisbon Treaty gave the EU sweeping new powers.
The new ambassador claimed to now be “leading the show” among European representatives in Washington.
The prospect of an EU official speaking for the UK to its most important ally has angered eurosceptics, who said it shows Britain’s waning influence.
Mr Vale de Almeida’s comments are also likely to alarm Sir Nigel Sheinwald, the British ambassador in Washington. Sir Nigel is thought to have struggled to build strong relations with the White House after a memorandum he wrote for Gordon Brown questioning Barack Obama’s experience was leaked in 2008.
Mr Vale de Almeida has stressed to Washington officials and politicians that under the EU’s’ Lisbon Treaty, he has more power than his predecessors. “I’m the first new type of ambassador for the European Union anywhere in the world,” he said. “I’m supposed to have a wider mandate than my predecessors.” Mr Vale de Almeida said: “Our delegations now cover a wide spectrum of issues well beyond the economic dimension, trade dimension and regulatory dimension, to cover all policies in the union, including foreign policy and security policy.”
The Lisbon Treaty took force last year, taking the EU another step closer towards acting as a single entity in international affairs. The treaty created a European president and foreign minister and gave EU diplomats new powers to speak for all 27 union members on many issues.