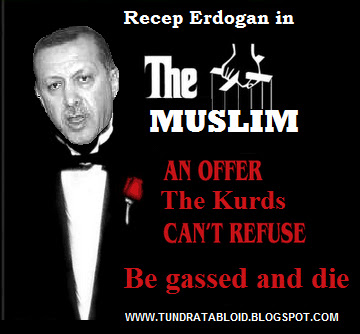 Saddam Hussein gassed the Kurds, now it’s the Turks’ turn to handle their pesky Kurdish problem. Yeah the Tundra Tabloids understands that the PKK are a bunch of Marxist terrorists, but the issue here is how the Turks resort to their traditional imperial Islamic self and violate Western club rules about something as basic as not using chemical weapons.
If the story turns out be factually correct, this would be a good reason for the folks at NATO to finally divest itself from the Turks once and for all. Lets face it, they’ve already chosen to drive themselves off over the cliff, with their rejection of Kemal Attaturk’s secular modern state in favor of Islamosocialism.
Containment should be the next logical step, but no, we have European fecal heads falling on their faces in appeasement, as well as a US president doing much of the same. Good grief, November can’t come soon enough. KGS

Photographs that show PKK fighters killed by chemical weapons used by Turks have been confirmed by German experts, according to a Der Spiegel report, Thursday.
The German newspaper reported that the evidence puts added pressure on the Turkish government.
Turkey has long been suspected of using chemical weapons against Kurdish rebels. German politicians are demanding an investigation into the claims.
According to the report Turkish-Kurdish human rights activists say that the photos show eight members of the Kurdistan Workers’ Party (PKK) underground movement.
The PKK members were thought to have been killed in September 2009.