Erdogan: No matter about the past, if you
can work with the Iranians, so can we
There is the natural human tendency to use whatever means to satisfy your own goals, as well as using bonified enemies to help crush your common enemies, this has been the case throughout human history. So why would it not be the case in regards to Turkey (Sunni) and Iran (Shiia)?
They all hate Israel, and if Iran and Hezbollah can work with Hamas, there shouldn’t really be any problem with an increasingly Islamized Turkey that wants to reposition itself as the leader within the Muslim Sunni ME, working with Iran. In their thinking they can all turn their knives on each other afterwards. KGS 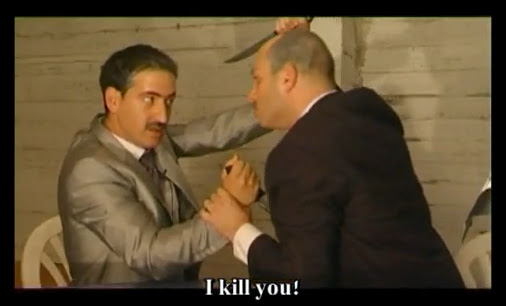 JPOST: Turkey and Iran are rumored to be helping Hizbullah obtain new weapons, Italian daily Corriere Della Sera reported on Wednesday evening. Turkish intelligence chief Hakan Fidan reportedly met with his Iranian counterpart Hossein Taeb to discuss relations between the two countries.
Sources told Corriere Della Sera that Turkey will “send sophisticated weapons, rockets and guns to Syria, that will end up in Lebanon,” where the Iranian Army will ensure the weapons are transferred to Hizbullah.
The Iranian Revolutionary Guards “will facilitate the transition, ensure safety, watch loads on the routes, and provide support to the border,” the report said.
The Iranians reportedly want to build a weapons network similar to that in the Sudan, and hope to help Hamas, as well.