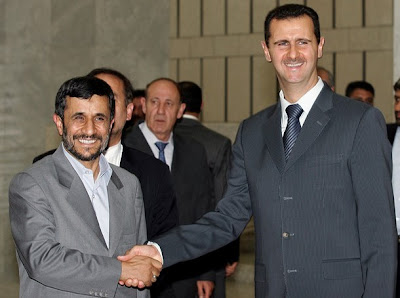 Moody and Assad:
The fantasy analysts make our live so much easier

There’s nothing like the analysis of Barry Rubin to cut through the dross of Middle-East thinking and policy making. When you learn to read the players of the region and the thinking behind their political moves, everything becomes much clearer as a result. Prof.Barry Rubin contributes greatly to that end, understanding the Middle East and what drives the regimes to act the way they do. KGS

Can You Handle The Truth?: Poll Shows The Shocking Reality of Arab Public Opinion

This is one of those stories about the Middle East that is totally amazing but not the least bit surprising. What, you ask, do I mean? From the standpoint of the way the region is portrayed in the West this information is incredible but if you understand the area it is exactly what you’d expect.
I’m referring here to the recent 2010 Arab Public Opinion Poll conducted by Zogby International and the University of Maryland for the Brookings Institution. Note that this poll was only done in relatively moderate countries: Egypt, Jordan, Lebanon, Morocco, Saudi Arabia, and the United Arab Emirates,
Here are some of the main findings:
–Arab views “hopeful” about the Obama Administration policy in the Middle East declined from 51 to 16 percent between 2009 and 2010, while those “discouraged” rose from 15 to 63 percent. Why? Because while the Obama Administration tried to flatter Arabs and Muslims, go all-out to support the Palestinians, distanced themselves from Israel, and took other steps it was not deemed sufficient.
Nothing the United States did would persuade the audience because of such factors as: different ideologies and ambitions, clashes of interest, the filter of government and Islamist propaganda, and excessively high demands. While the populations are “discouraged” with the administration largely due to their radicalism, the regimes are unhappy with it because they feel the U.S. government isn’t strong enough in opposing such enemies as revolutionary Islamism and Iran.
Still, unless U.S. policy comes to resemble that of Egypt, Saudi Arabia, or Jordan, many or most Arabs will continue to be bitter and angry. Obama’s levels of support among Arabs are not that different from those of his predecessor.
–What about perceptions of threat? Same story. Those thinking Israel is a huge threat is at 88 percent (down slightly from 95 percent in 2008) showing that overall hostility just doesn’t go away. Do you think that any conceivable Israeli policy would change this fact?
Note that while it is would not be surprising if Arabs see Israel as an enemy generally or as being mean to the Palestinians, for Jordanians, Saudis, and Egyptians to describe Israel as the greatest threat to their own countries shows something beyond rational calculation is involved. The prevalent idea is that Israel wants to take over the Middle East or wipe out Islam or destroy the Arabs. This makes a lasting compromise, comprehensive, and friendly peace rather unlikely.