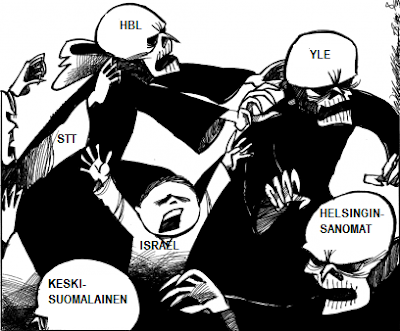 The Tundra Tabloids conducted a 90 day research project on Middle-East reporting in Finland, focusing on the newspapers, the Helsingin Sanomat and Keskisuomalainen, from the beginning of February to the end of March. On an average, the HS reported on Israel once every 1.3 days, while the KS every 1.6 days.
The Sweden, Israel and the Jews blog takes note of Ilya’s analysis that centers on the same phenomenon :

“In an average month of 30 days, there are never more than 3 days without some negative reporting on Israel in the publicly-funded state TV (SVT). Check out the news function on teletext and on a minimum of 27 days out of 30, there will be a story about Israel. Not about Iran, Syria, Saudi Arabia, the Lebanon, Egypt, Jordan, Somalia, Bangladesh. The standing joke in Sweden is that one can always tell when there is a new employee at the taxpayer-funded SVT, because that is the day there is no anti-Israel item on teletext. New recruits never make the same mistake twice, if they wish to keep their jobs.”

This pretty much mirrors the situation here in certain Finnish newspapers like the HS and the central Finland newspaper the Keskisuomalainen, but as bad as the Finnish state broadcastor, YLE,  can be, it isn’t quite as bad as what goes for normal in Sweden. When there is a brouhaha that involves Israel, you can be assured that the Jewish state will get short shrift, even lied about, but not the focus of a witch hunt 24/7. KGS
NOTE: Go here for the rest of Ilya’s post.