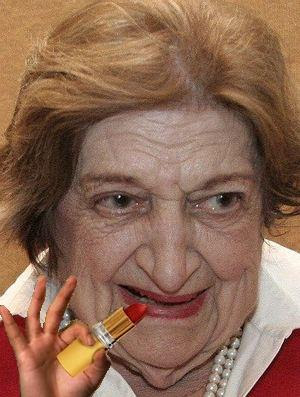 Anti-Semite Thomas:
I’m as punched as pleased
This is one of the more ugly of journalists, inside and out, that captures the mindset of the main stream media. For years her colleagues in the press corps did nothing about her anti-Semitism, and now, since her disgraceful departure from the journo profession, she is the toast of the Arab community, or at least by the morons that run the Arab American National Museum in Michigan. Shameful. KGS

Helen Thomas may get statue in museum

Arab American National Museum in Michigan launches campaign to raise money for statue of veteran White House correspondent who ended career by saying Jews should ‘get the hell out of Palestine’.
WASHINGTON – Ahead of her 90th birthday, veteran White House correspondent Helen Thomas, who resigned following her offensive remarks against Israel, may be getting a statue in her honor at the Arab American National Museum in Michigan.
Supporters of the initiative in Dearborn, a suburb of Detroit and the town with the second largest Arab community in the United States, are trying to raise money to have the copper statue constructed and put in the local museum.