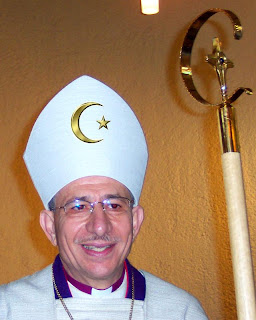 Faux Bishop Younan: I did it, now I can lead
the blind and the willful ignorant fully to the dark side
The dear bishop has been a regular feature here at the Tundra Tabloids, for this Finnish speaking Arab propagandizing cleric truly represents the forces of dhimmitude and supporter of anti-Israelism (or Jew hatred) all in the same package.
This anti-Semite and serial liar -for that’s what he really is when his record of deceitful nonsense and sermons disguised as calls for peace and understanding, are viewed with a wathcful eye- has long had an extremely negative influence on Finnish church workers visiting Israel and the P.A. controlled areas of Judea and Samaria and Hamastan.
He’s a propagandist, a charlatan or a wolf in sheep’s clothing, feeding the clueless Finns one steaming pile of crap after another, in which Israel is the chief evil, and the poor fakestinians are the victims, in every case. Those of us who know better, know that the man is liar, habitually, for whatever his reasoning may be, he nonetheless is a habitual liar…and he does it with a smile on his face with a touch of fake concern for “all the peoples in the region”.
Truth be told, he would like nothing better than to see the Jewish state cease to exist, at least that’s the Tundra Tabloids’ take on him. His world view is not that far from Hamas’ or Fattah’s where Israel is concerned, he’ll fight tooth and nail to become once again a dhimmi under Muslim rule, because he’s an anti-Semite. KGS

Evangelical Lutheran Church in America: STUTTGART, Germany (ELCA) — The Rev. Munib A. Younan, bishop of the Evangelical Lutheran Church of Jordan and the Holy Land (ELCJHL), has been elected president of the Lutheran World Federation (LWF) July 24 at the LWF Assembly here. Younan received 300 votes affirming his election, 23 against and 37 abstentions. There were no other nominees.
The LWF Assembly, the organization’s highest legislative body, is meeting here July 20-27 under the theme “Give Us Today Our Daily Bread.” The LWF is 140 member churches in 79 countries, representing more than 70 million Christians worldwide.
Younan succeeds the Rev. Mark S. Hanson, presiding bishop of the Evangelical Lutheran Church in America (ELCA), who has been president of the LWF since its 2003 assembly in Winnipeg, Canada.
“Bishop Younan will provide exceptional leadership for the LWF. His leading the ELCHJ in the midst of the suffering of occupation will become a sign of hope for all LWF member churches,” said Hanson.
Younan’s “passion for justice and peace will inspire us. His commitment to making visible the unity we have in Christ will build upon the LWF strong ecumenical commitments,” said Hanson.
“Bishop Younan is modeling what it means to confront religious extremism by building strong interfaith relationships. He centers his ministry in the proclamation of the gospel through which God sets us free to serve our neighbor. It is a great joy to pass the mantle of leadership to my friend Bishop Munib Younan,” said Hanson.
NOTE: Under this guy’s “leadership”, ther will be an even greater push for interfaith dialogue with the Mussulman and calls for tolerance of Islamic norms and traditions by the non-Muslim. as well as trying to drive a stake into the heart of the Evangelical Christian support for Israel.