Skip to content
Home
/
2010
/
August
/
1
/
Uncategorized
/
THE NEW TURKEY IS ALL BAYONETS AND BLACK FREEDOM SACKS…….
Facebook
Twitter
Google+
LinkedIn
Pinterest
This is such a “spot on” article by Peter Hitchens that the Tundra Tabloids almost doesn’t know where to begin. Bayonet minarets, sinister shops sewing black burkas, enforcement of sharia and ignorant British politicians, that’s just for starters. Turkey is headed for the Islamo-crapper, and has been for some time now.
There is no longer any doubt, with the present regime pushing Turkey over the brink, which means far away from Kemal Atturk’s modernized state, the ruse that Islam can be modernized is proven to have been a hoax. “Moderate” Malaysia and Indonesia are busy throwing themselves down the same Islamic hell hole asTurkey.
It behooves the TT that there are still voices out there trying to pimp the “moderate Islam” is the answer meme. Forget it folks, it doesn’t exist, it’s the mythical unicorn, the tooth fairy and the Easter Bunny all rolled into one. If you’re not convinced, just ask any Christian living in Turkey how many pig farms and slaughter houses are allowed to exist anymore in the “new Turkey”. KGS 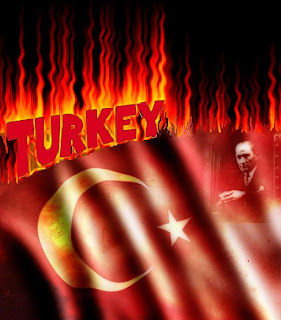